Let’s backtrack, let’s go back in time. Let me explain some history, some events that I never wrote about. During late April and early March I was in San Diego for the SPIE 2006 Smart Materials conference. My presentation got finished the night before I gave it and I felt drunk the whole time. Not because I "was" drunk. No, no, there was some sort of jetlag sickness afoot. Every time I moved too fast my motor skills lost their grounding and I had to scramble to regain my balance. The coffee probably didn’t help; I was drinking large volumes of it to stay awake. Nine hours of jetlag seems like a good idea when Zurich is cold and grey. But it was somewhat grey in San Diego as well, so my soul saw no immediate justification for the turning of the inner clock on its head. Ah, but soon the conference was over with. Done, extinguished, and as generally happens I wondered what the point was. I stopped by the airport early Thursday morning to catch an Alamo shuttle and soon was getting lost somewhere around La Jolla – looking for Highway 1 and views of the fabled Pacific coast. I got on the main road eventually and things began to fall into place. Not on the philosophical or emotional, or even the metaphysical level (not that I know what those are anyways). No, nothing was solved and nothing mattered. I just felt at peace because I didn’t have to do anything. I made my way up to Big Sur. It’s a favorite topic on photography forums in reference to travel in California. Everyone wants to know what highway to drive up for the best views. Few ever ask about what trail to hike up. They say anywhere on Highway 1 is timeless, and they’re right. 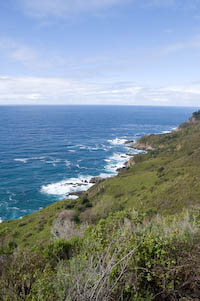 But after the plane ride, sitting in conference talks, and now in a car seat for unforeseeable hours, I was desperate to feel squishy ground below my Chaco sandaled feet. Having no camping gear I opted for a day hike and found myself moving quickly up Mt. Manuel. The park pamphlet said it was 3000 feet high towards the sky. I was worried at first, I’m getting fat in my old age and rather enjoy doing nothing, but there was no need to question the need to explore. My feet were light and moved fast through the tree-lined trails. I pulled out my tripod and held it like a sniper rifle. I imagined myself as some sort of rebel in the jungle. Not the kind backed by the CIA of course, no, the true rebel, the one who had taken all the money and guns the CIA had given him, and then started his own covert agency. Or maybe something more akin to a Zapatista. I could have turned back when I saw there were still patches of snow on the trail. But I knew these thoughts to be craziness. I pushed on and reached the sunny top before my feet froze in the snow. 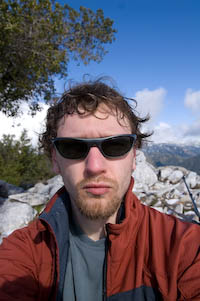 The view, of course, was worth it. To the East were the snow capped peaks of California. To the West, a blue horizon and a peaceful Pacific wind. In between these vistas I found myself, my dirty feet, my soaked blue jeans and in my mouth the last satisfying bites of a tomato and avocado sandwich. Like Tyler said, "Nothing was solved, but nothing mattered." 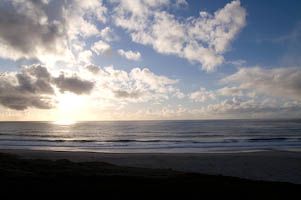