Much spunk is made about decisions. To survive you have to get involved and make choices in life. Maybe you stay up at night wondering if you should make one or not, because, of course, you have to make one or two eventually. After all, they make the world go wrong. You make one and then wonder if it was right or not.

All those factors, those variables to consider, what if the camera cost too much? This bike doesn’t have shocks, but it does have the disc brakes. Should I run the fatigue test with a median strain of 0.10% or 0.20%? And maybe I’ll buy a mountain bike later, which would make the shock variable moot. Hey, let’s go find Osama, no wait, okâ€¦invade Iraq.

There’s right and wrong – good and evil in the world. We’re taught this from birth, and it’s the basis for many beliefs and books. But when are choices really black and white? How do you know if it was the right decision? You think you know, but do you really?

If something goes wrong it generally just means you did something that your boss didn’t agree with. You know for sure it was the wrong course of action because your ears are physically being assaulted by his voice. Or maybe it’s more subtle, the wife throws something in your direction or the guy walks off in a huff.

But what does it mean if something is right? Well, no one yells at you or says that you screwed up. They’re silent because there’s nothing to complain about. You still get a paycheck and everything goes on, da doom, da doom doom doom.

In most situations you can’t understand and anticipate all of the factors that will eventually establish the criteria for that lonely little decision being the Right choice. But if things start to go wrong, just change the game, rewrite the future history – and make some new decisions.

Break the original decision up into manageable pieces. The path from black to white has a maximum of 256 shades of Grey (if you’re looking at a computer screen) and you can lean very far in either direction without being totally black or blown-out bleached white. If things start to wrong, just make some new decisions and swing back to the correct course.

Above all, don’t be afraid to fail. When you get the fear of failure inside you start to hesitate and second guess yourself. With the exception of those universal moral truths, the only real failure is letting fear cripple your ability to choose between Pepsi and Coke.

But the only thing on my mind at the moment – the decision, the question to be answered, you know the conflict: should I try to solo the Fusshorn (and possibly the Aletschhorn as well) over the weekend or safely stay home in Zurich?

If thereâ€™s no post by next Friday, weâ€™ll be able to convincingly say – in hindsight, that it was a poor course of action to follow. 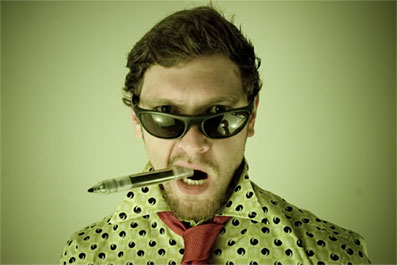