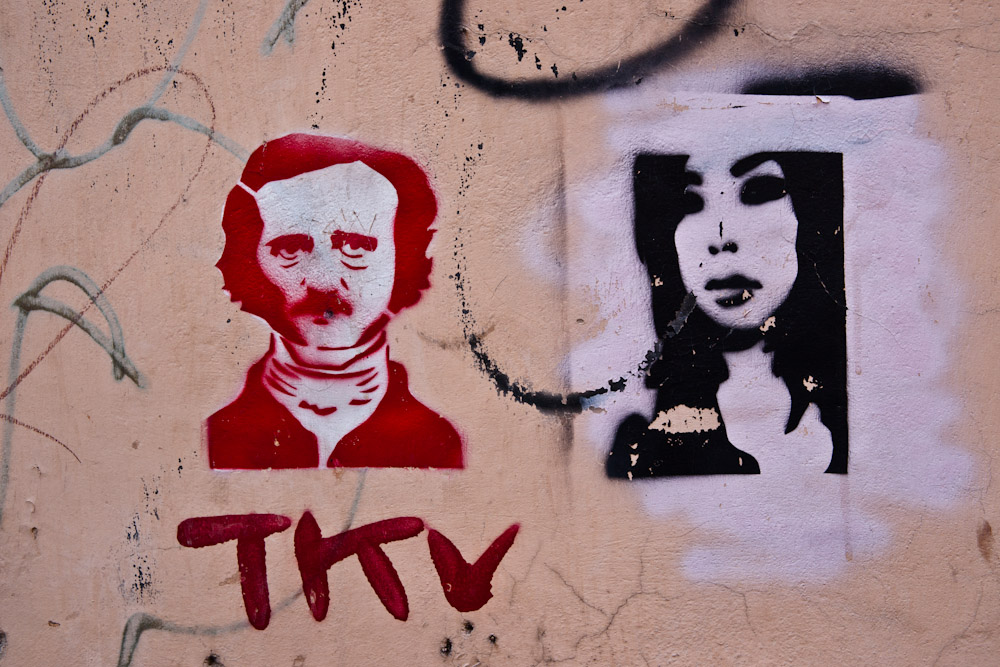 A gladiator on his way to work with a trolly bag, a Bratz doll posing on a pay phone, and pigtailed silhouette dropping a Swastika into a track can. Those are the images floating through my mind when I think of Rome in the August of 2009.

I was in the city to photograph a wedding, and spent the free mornings soaking in the street imagery, because once the sun rises high in the afternoon sky, the only think to do in Rome in August is relax in your air conditioned room at the Italian military hotel and enjoy a sweet fresh nectarine. All the locals have forsaken the heat of the city and you’ll only see small hordes of Asian tourists with a few pockets of Americans and other random travelers weaving through the streets, wondering why they decided to visit Rome in this unendurable heat. The nights however, are amazing. 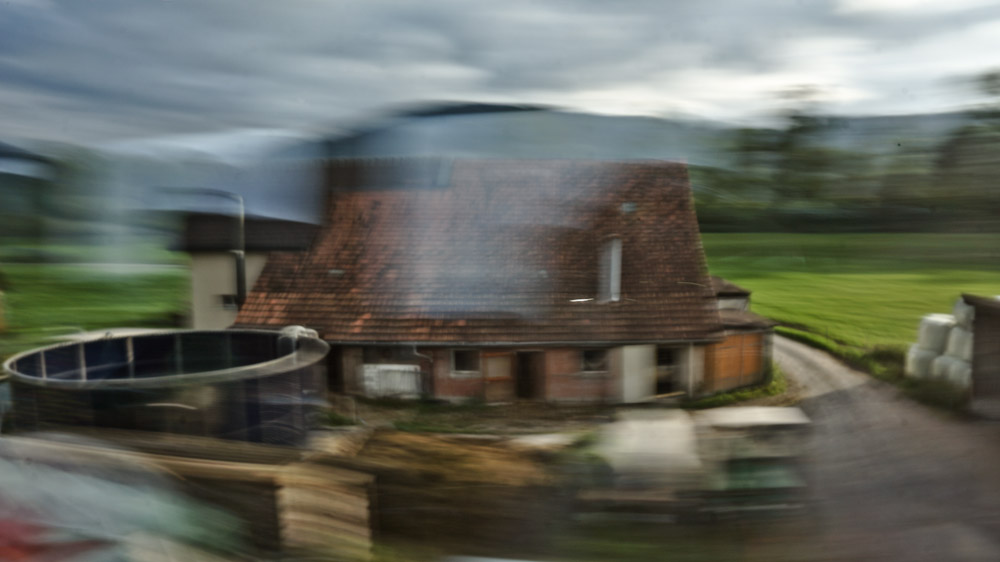 If you live in Switzerland and have no car you ride the trains a lot. It’s one reason why I like living here, because the time in-transit can be used for something. When you’re driving here or there or biking, you have limited attention and ability to do anything beyond watching the road. I stated doing train passenger landscapes on the train last winter. I wanted to create some slightly blurred landscape images to layer into the Toy Warz storyline I’ve been developing with Bratz and Monster High dolls.

Here for example, you can see how the blurred background trees give just a little landscape texture to the background, mixing in will with the foreground but giving some sense of depth and context to the central image. I wanted to give a bit the post-apocalypse feeling and the texture layer of clouds could be blended into the narrative of the image. Expanding beyond that, I was also looking for image to give more texture or shadows in waves, to mix on either side of portraits or or to direct the eye of the viewer from top to bottom.

These image have been taking mainly from the route from Zurich to Winterthur and from Zurich towards Chur. I started expanding on this theme and realized I just like the landscape images, in particular when I pan while shooting. The effect is that the background landscape is sharp while the foreground elements like trees and houses are blurred. It’s an experiment of image capture and relative motion of the train to the landscape, mixed in with a long shutter speed, it gives a nice surreal feeling to the shots. If you shoot while the train is curving away from the foreground, you get an added wave texture to the image. Some of these I’ll use for the Toy Warz backgrounds, but I also love them as a series on their own. 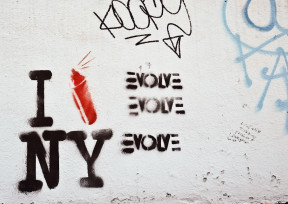 In April of 2013 I had the presence of mind to fly to New York. This wasn’t an accident, I met a wonderful person and flew out there to hangout. Fortunately we didn’t visit Times Square, and instead hung out around the hipster center of the world in areas like Bushwick and Williamsburg. Locations where the graffiti is fresh and the ideas pour off the walls like lyrics from an ancient Greek thespian to far gone on Cappuccino Bombs and espresso beans to do anything but watch amused as their fingers spray lovely detached madness across the walls. 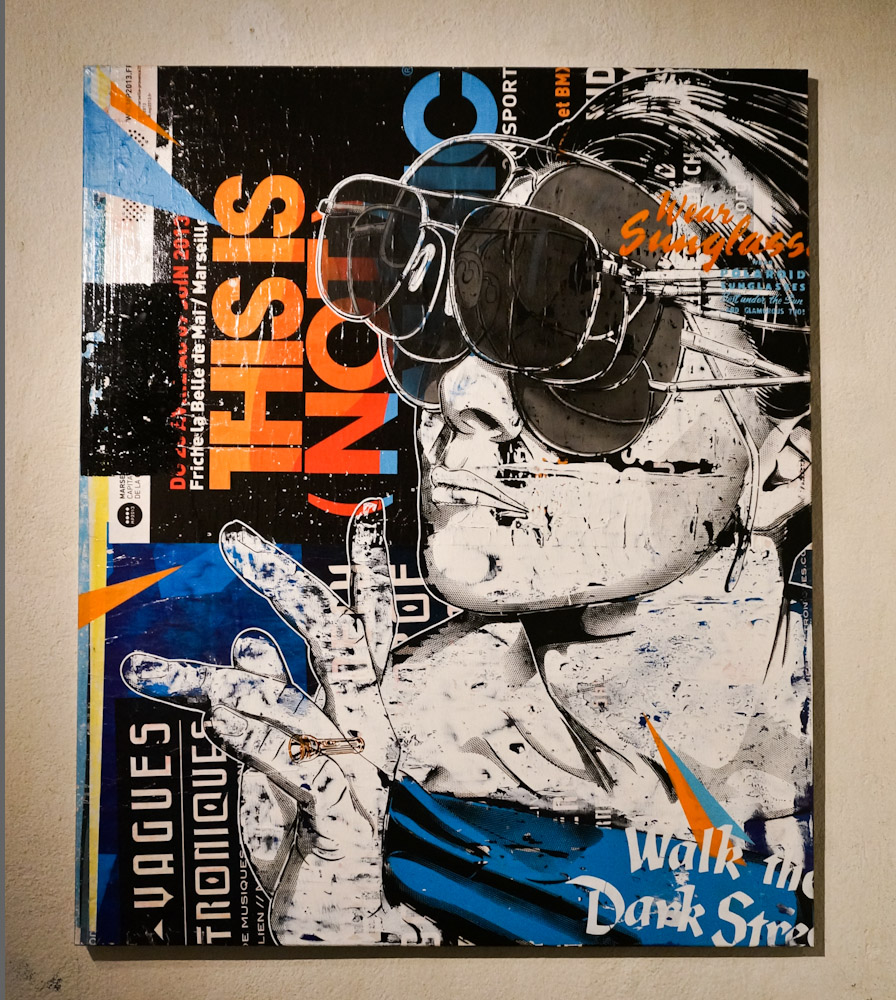 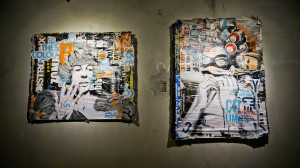 The Stencil Bastards II show is currently going on (12. July – 30. August 2013) in Zurich and it’s well worth checking out. Featured artists include:

Curated by Christian Guemy, the show is hosted by the Starkart Gallery, which is an excellent venue for such an experience. A DJ played delightful strange beats from the garage while I wandered through the different rooms and basement of the house, where each artist takes over part of the space with their art. 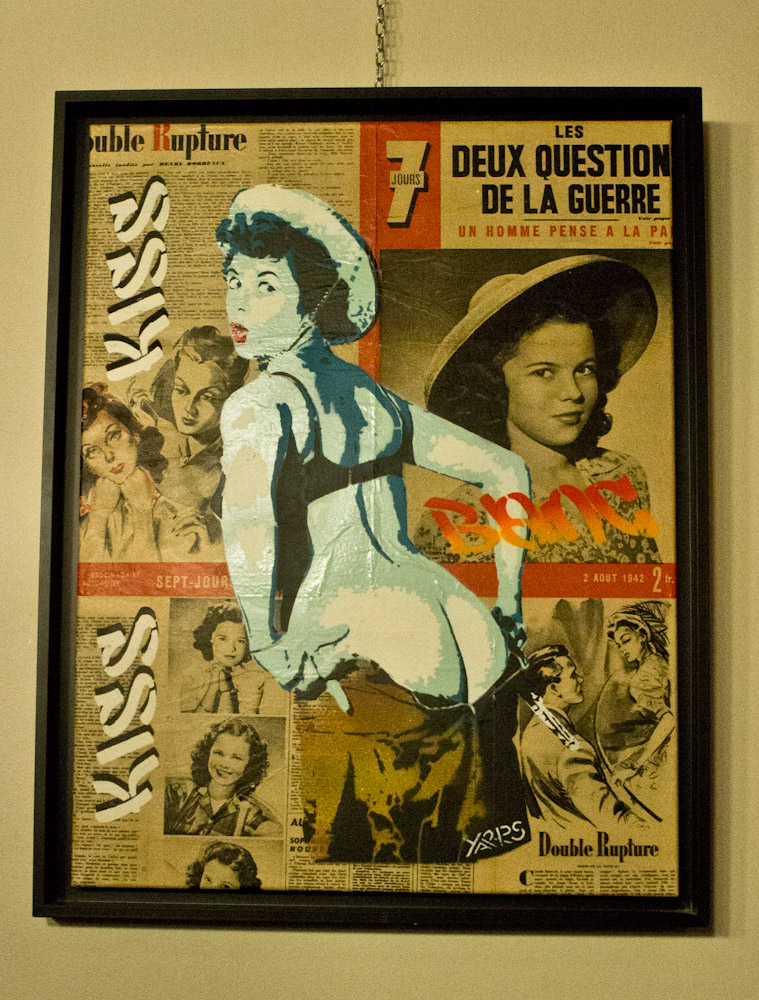 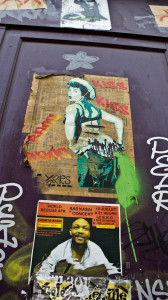 After the Viking Startup bus drove into Paris and I pitched Amordomus on stage with the team at the Microsoft building, I took some time off to relax in the city and check out the street art and graffiti. The place to go is Rue Denoyez, I know this because I have an awesome friend who knows the Paris graffiti scene, otherwise I never would have seen this amazing street filled with all manner of shapes and colors. I also wouldn’t have attended the Wolf Song Night opening at La Galerie Ligne 13 or gone to the La Poste Museum Street Art exhibition. After the pressure cooker of building up a startup idea on a bus from Copenhagen to Paris, with a pitch competition in Cologne on the second day, my mind was overloaded and I was happy to relax and take in the non-linearity of the stenciles, sprays, and poster art on the walls. END_OF_DOCUMENT_TOKEN_TO_BE_REPLACED

I’ve been to San Diego various times, mainly to speak about smart materials (active fiber composites) or to hangout around Pacific Beach. This time I wanted to see more of the downtown area and hunt some graffiti. Near the Padres stadium and the Gaslamp district, which is also in waking distance of the famous convention center, you are in what I call the consumption zone. If you’re not eating or shopping, you’re going to a place where you can eat or shop, or a homeless person on the street corner is asking for money. It’s a part of town designed for tourism and consumption, and everyone is selling something to you. There are a few works on the walls, but mainly it’s stickers on lamp posts. END_OF_DOCUMENT_TOKEN_TO_BE_REPLACED 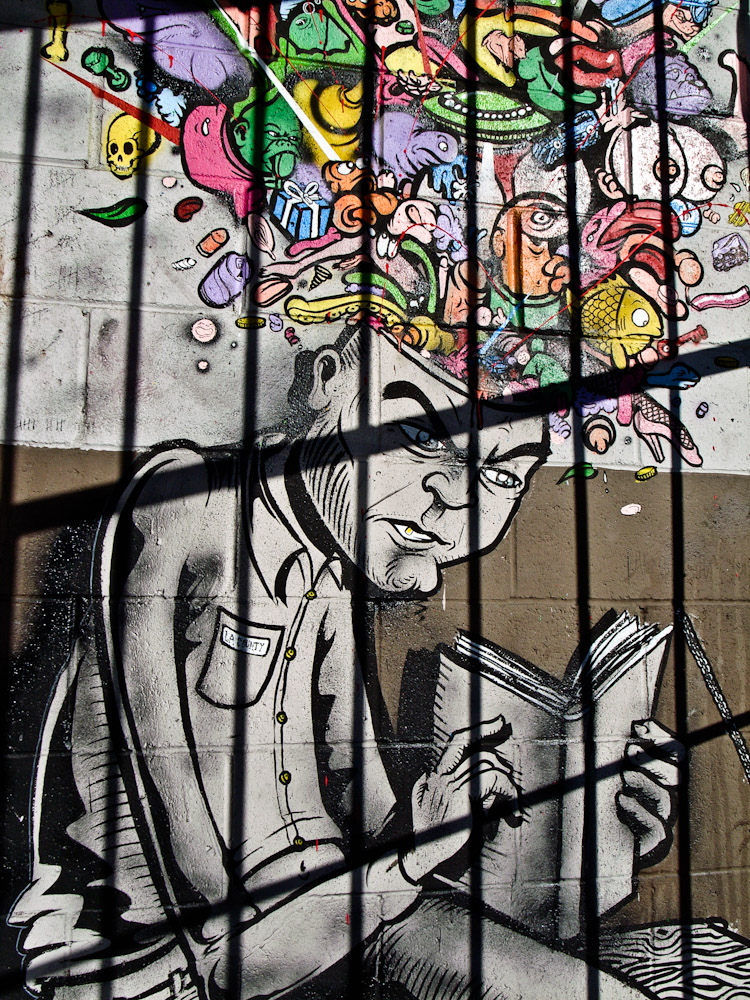 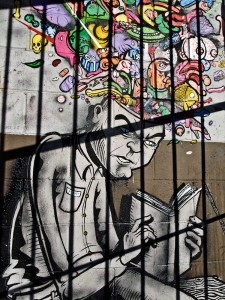 While visiting a friend to talk about designing energy efficient solar powered boats I took a few hours to check out the graffiti in Los Angeles near Little Tokyo. I started at Union Station and walked down Alameda street. Around 4th street (before and after) you start to find murals on the buildings and can safely stop to snap some photos with police sirens screaming in the background. Some photographers will hand their DSLR out the open window and speed by snapping random images, makes you feel like you’re walking through Detroit with the freaked out suburbanite tourists doing photo drive-bys. I felt fine walking around with a Ricoh GRD and GoPro in my hands while carrying my Macbook Pro on my shoulder and my Sony NEX VG-10 and Hasselblad lens in my backpack.

END_OF_DOCUMENT_TOKEN_TO_BE_REPLACED

Now that I’m unemployed, I’ve had time to take a workacation and meet with the Lost In Reality team down in Lisbon, Portugal. We’re developing a mobile app for location-based storytelling, but I also took some time to relax and explore the whispers of Lisbon and the graffiti and street art a bit. The people and artists there have a lot to say with the financial crisis hitting Portugal and it’s well represented on the walls of the city. END_OF_DOCUMENT_TOKEN_TO_BE_REPLACED 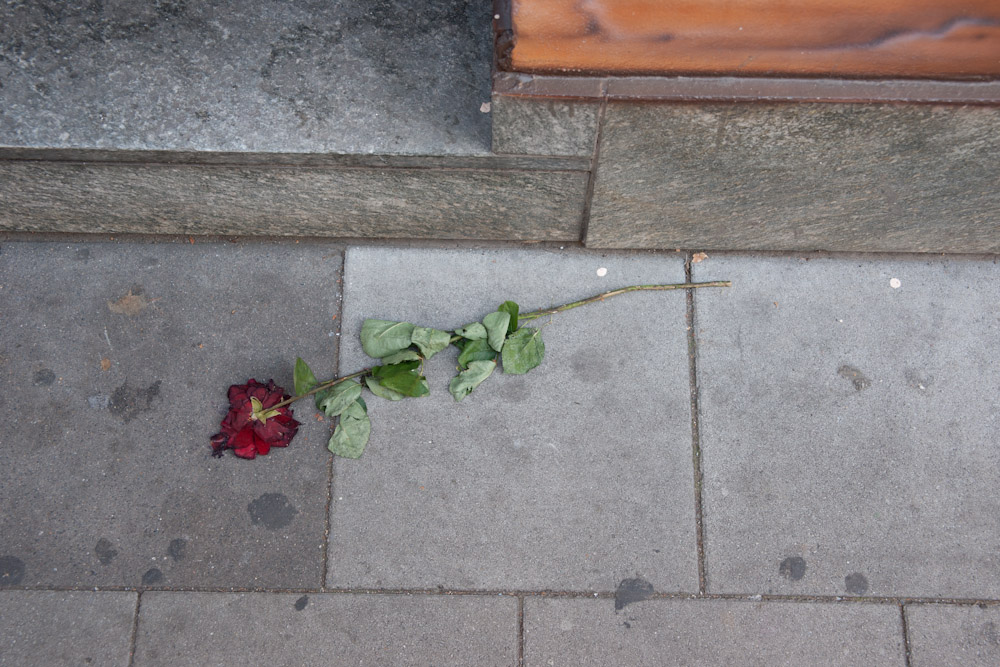 I headed to Cologne, Germany for the European Pirate Summit. It was an interesting event, filled with startup people from around the world, goth fire dancers, a mechanical fire breathing bull, more fire, robots, awesome ideas, and fantastic people. I took some days before the summit to walk around Cologne checking out the street art and graffiti. Why? Because that’s what I like to do. The museum is on the outside, always changing, and the entrance free is always free. Two days was too few to walk around Cologne, maybe I’ll head back there for the Cologne Startup Weekend. END_OF_DOCUMENT_TOKEN_TO_BE_REPLACED

I was heading to a Strobist lighting workshop at Cern in Geneva back in 2009, and spent the day before the even walking around Geneva. Before walking through a Tamil Tiger protest outside the UN I wandered the streets looking for street art. Geneva has a high hip hop graffiti influence. The Zurich graffiti style is more akin to what you might see in Berlin, a bit harder while Geneva has a friendlier feeling of warmer climates. I think most of this stuff like the funky metro train are probably gone by now, the area was locked off when I shot there. I should head back there sometime, it’s been some time and street art hunting once in a city is like only climbing up a mountain once. It’s cool and all, but it’s the process of going back, rethinking thoughts you thought and feeling how the world around you has or has not changed as you have or have not changed. Maybe that’s why I like gong back to Berlin every year or so and making new photos of old graffiti I already shot years before. I’m heading to the European Pirate Summit in Cologne next weekend, and I’m looking forward to seeing the street art there for the first time, and photographing it. END_OF_DOCUMENT_TOKEN_TO_BE_REPLACED 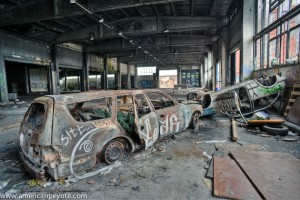 The first rough cut from my video poetry collaboration with DJ Cue is up. The music was composed by DJ Cue (Bobby Cuevas) while I provided the visuals and recorded ambient audio. This was made possible thanks to Talenthouse.com and their Creative Invite collaboration platform. This is a rough cut, so it doesn’t include the poetry dialogue that I will eventually add (actually, I’m looking for a woman with a nice classic German accent to do some voice recording), but it’s a nice visual representation of what I’m trying to create. Video imagery includes the abandoned Bärenquell Brauerei in East Berlin, Barbara running through Zurich Bahnhofstrasse (shoot organized with Ethan Oelman), and also a quick look from a underground club night in Berlin, part of an Alternative Berlin night tour I did in the city. Thanks to everyone involved, now that I’ve setup my computers in my new apartment I can get back to shooting and creating on a more normal basis. Enjoy…