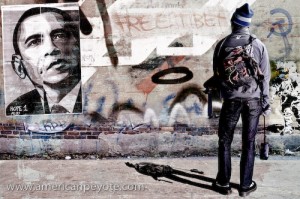 Graffiti speaks across the walls and streets and later I see it all at once in my heads. All the hope and hate and colors and concrete are there in front of my eyes. Shadows on the streets, whispers in the heads. I walked around Zurich shooting graffiti the other day. The excursion was slightly cold and very cool. I walked towards the old Lowenbrau brewery, just beside the river. I’d seen the place thousand times from the train, but never took the time to explore it on foot. just like I’ve visited Zurich a thousand days and nights without ever really walking around with a camera. There’s always things to find, new things to inspire and learn from. I forget this sometimes, but love finding it again. 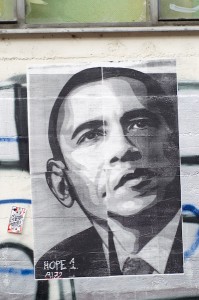 I love graffiti because you never know what you’ll find. On the wall of Lowenbrau is a poster of Obama’s Hope, staring off into the future. On the opposite side on a wall a sticker reads, “911 was an inside job.” Across the river from the brewery I see the Star of David and a Swastika sprayed next to a sidewalk leading up to some houses. There’s an equal sign between them. Social commentary on the action of the Nazi and Israeli governments perhaps? Who knows, it’s open to interpretation, some might say intimidation. The next week there’s a story in 20 Minutes about anti-Semitic leaflets being stuffed in mailboxes, someone said it was like the 1930’s. Hope and hate a few minutes walk from one another. In between a 911 conspiracy. Who knew the streets of Zurich were so crazy and political. Is it everywhere – waiting to be seen with the right eyes at the right time? Then there’s the socialists, the hammer and cycle are often found on buildings, usually not too far from an anti WEF image. Thoughts in time, what’s the reason? The abstract works are the best, no specific message, just shapes and colors, your mind doesn’t need to translate the universal language, just enjoy the views. 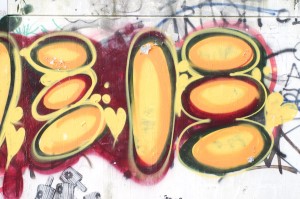 Zurich isn’t generally known for it’s street art. Berlin, Dresden, these are the cities which come to mind. There you find fantastic visions around every corner. In Zurich the streets are clean, the punks are few, and political demonstrations are anomalies, except for the 1st of May. But if you walk the streets and take a few turns you’ll find the voices on the walls. Images that were once in someone’s head and got translated to poems of the pavements.

The abstract comes out, the aliens faces, the eyes staring back at you and then looking across the city. The graffiti reminds me that Zurich is an inspiring place. Everything looks clean and orderly, but there’s also revolt inside the Stadt. There’s dissension, there’s hope, there’s inspired art. For some reason this fills my heart with joy. Sometimes I think that a city without graffiti doesn’t have a soul or just has nothing to say, or is under a social boot. I don’t think I’ve been in my any small mountain village in Switzerland and not seen at least a small sliver of street revolt on the door of a Kiosk or the side of a train. It’s not always in your face, shouting at you like a Coke advertisement, but the voices are there if you go listening for them. 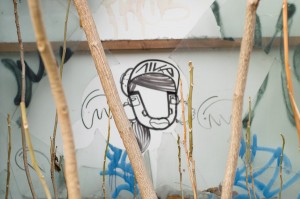 Ah, but who is saying what, you wonder. Not everyone is talking to the walls with spray cans, you only hear the most determined voices. That’s fine, I’m not looking for SAMO’s ghost or Van Gogh’s ear lobe. There’s Andy Warhol in the Kunsthause and galleries around Zurich, but I love graffiti because the environment is always changing, and part of the art, the texture of the images changes with the lighting and the season. You never know if it”ll be there the next time you walk by. I think of fleeting moments in the time that can never be recreated or improved upon. Perfect. 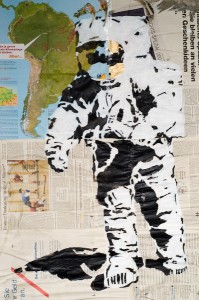 Beware of cities which are too clean, without stickers on the lamp posts or writing on the walls. Beware of people who always clean off the walls with out hearing what they say. Not all graffiti is good, a lot of it sucks. I vomit every time I see nothing but tags. In Zurich most of the stuff around the train tracks is just kids writing their names in colorful ways, who cares. What I like is seeing a horse in scuba gear, alien faces below windows and giant lizards crawling up the sides of buildings. The coolest find by far was this piece of newspaper on the wall near Escher-Wyss-Platz. Basically it’s an astronaut painted on newspaper, with a map included. Pure imagination, priceless inspirations.