The last time I was at the house I grew up in – my physical anchor in life, was just after my trip to California in March. After I visited Kate in SanFran, after the wine tour and the Wild Things T-shirt, and the excellent Thai dinner, I flew home to Detroit. Sometimes when you’ve been away for a long time, you want to get back to your roots. Recall things from the childhood dream and get a taste for what it would be like to be back in that post womb phase of your life. Climbing trees was a hobby of mine as far back as I can remember. If it was summer or winter I would often be found hanging and climbing in the front yard. My favorite tree was a weeping willow. It had died many years ago, but still had strength in its branches despite the little critters that ate it from the inside out. Its knots and branches were excellent training ground for what would later become rock and later ice. I even practiced with my ice tools on its decaying trunk. So it was with sadness that I learned it had been cut down. I had wanted to do the job myself, but my father had had other plans and a professional cut the beast up into manageable pieces. This was not good enough. It was my tree. I had become a part of it, it had trained me in my vertical escapades, and now I did what any tree climber would do to the teacher whom now lay butchered on the lawn. I finished the fucking job. My tool of choice was a double bladed axe my grandmother had given me for my birthday many moons ago. I twisted and twirled the double bladed Viking blade around my body like Connan the Barbarian. Behind the back, around the head, get the momentum going, 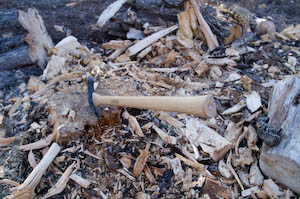 I sliced through the decayed masses like fingers through warm butter over nan at a tandoor festival. The deed honed my arms and I felt one with the willow as I had years ago when I swung from and scaled its body. The end had come. I tossed the split pieced into the woods to nourish the next generation and silently thanked the Great Spirit for this tree that had nourished my climbing ambitions. Our circle was now complete.