Interpreting the world around you and understanding the small graphic design and photography aspects of ad campaigns can be very useful for any aspiring photographer. Open your eyes when you walk down the street, and take in advertisements you’re exposed to. By thinking about their message and how well the advertisers present their visual message, you can begin gaining insight into how the visual medium can be used to communicate different messages and concepts. In particular, lookout for the overdone cliche messages and sex-sells overtones which seem to permeate ad campaigns the world over.

After four years in Switzerland, I’m still generally at a loss when it comes to interpreting advertisements and billboard messages. Understanding these things is essential to becoming at least somewhat integrated in any society. How advertisers communicate with the public gives great insight into the mind set of a people.

One of the more peculiar ad campaigns in Switzerland, and particularly around Zurich is the LOVE LIFE STOP AIDS campaign to bring exposure to the idea of having only protected sex, and thereby reduce the spread of the most notorious sexually transmitted disease in modern history, the HIV/AIDS virus.

A primary visual communication tools for LOVE LIFE STOP AIDS is billboards; on street corners, at train stations, wherever people might glance and have their attention diverted to the idea of stopping the spread of HIV/AIDS. As with any advertisement, it’s the way in which the viewer’s attention is diverted which makes the LOVE LIFE STOP AIDS campaign stand out.

Each billboard involves two people having sex – somewhere. Attached is the message: LOVE LIFE STOP AIDS and promotes safe sex in Switzerland. The real attention grabber is the location. For some unrelated reason, the sex acts take place in unique locations: under water, in caves, in the jungle and…on Mars, yes, the planet – not the candy bar.

Now, there are various ways of interpreting this ad, obviously the message has to do with sex, seemingly of a homosexual nature, and the dull witted observer might suppose the idea is to have unprotected sex on Mars to stop AIDS – unprotected in the sense that Mars has no atmosphere, and if you open your space suit to engage in intercourse, the pressure difference will no doubt force your eyeballs out of their sockets; thus leaving the love-struck stud gasping for air like Arnold in Total Recall after he’s ejected onto the arid martian surface. 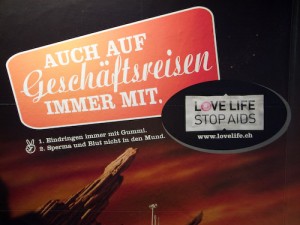 Poorly translated, the written part of the ad basically says, “Always with, also on the business trip” and no doubt encourages people to take condoms with them wherever they are going. Because, obviously if you’re going to Mars it’s going to be for business, as commercial tourist flights are not currently flying to that planet – and if you happen to have sex on the surface of the planet, using a condom is far more important than ensuring your space suit is properly sealed against the Martian atmosphere.

On some level the LOVE LIFE STOP AIDS message is communicated well using the gay-sex-on-Mars analogy. Now, it’s obvious that sex on Mars won’t stop AIDS, and that opening your space suit on the Martian surface will mean certain death. So in some sense the space suit could be analogous to using condoms during sex, implying that simply that engaging in unprotected sex in a dangerous environment will dramatically increase the possibility of contracting the HIV virus. Most likely the aim is that the shock value of displaying a somewhat graphic depiction of homosexual intercourse on the street will shock people and lock a visual marker in their brain, connecting condoms and AIDS prevention.

A thorough description of the 2008 LOVE LIFE STOP AIDS campaign can be found on the official Swiss Federal Office of Public Health (FOPH) website. It includes TV spots, printed ads, and a pretty cool flash-based webpage (check-your-lovelife.ch), which shows that some serious design thought and photography was put into the LOVE LIFE STOP AIDS message.