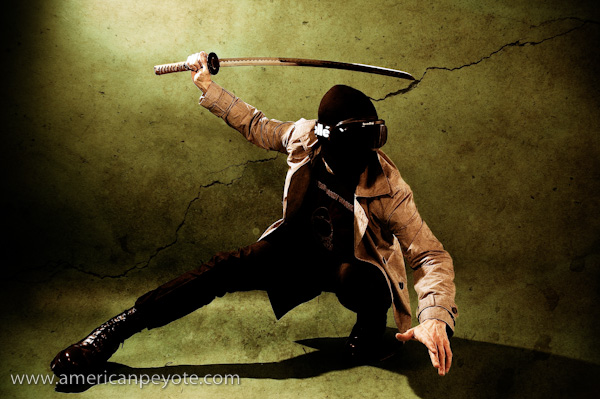 There are many things that are easy to buy in life. Cameras, lights, guns (in America), pants, Katana swords. And it’s easy to say, “Yes, I have a Katana, and therefore I’ll hold it and logically the resulting picture will be cool.” Why? “Because, I’ll have a sword, and Samurai swords are cool…like guns. So, I’ll just hold it and it’ll be a cool shot.” No my son, you’ve seen too many Tarantino movies. The simple fact that you decided to use a gun or a sword in a photo shoot is not a magic-bullet-express to coolness. Yes, yes, I know, you want to believe that your model can become Uma Thurman from Kill Bill or Bruce Willis from Pulp Fiction – just because they’re holding a highly evolved Japanese decapitation device. I may be daft, but I think that even Angelina Jolie looks awkward and fake with a firearm in her hand. Not quite as foolish as Pamela Anderson in Barb Wire, but not far off either. Good photos come from the imagery of the subject and the message contained within their static forms. It only has to look believable for 1/120 of a second if you’re taking a photo, but it’s easy to come up short. So what goes into creating a cool dramatic image using things like swords and guns as props in photos?

Images and pictures are interesting because the viewer feels a sensation, a reaction to the medium. This is paramount over everything else, and 99.99% of the time your camera doesn’t matter too much. You don’t need a Hassy and a production team to do some cool ninja shots, you just need to get a handle on the visual imagery. Visual imagery? Ok, so where does that come from?

One day I was thinking up image concepts and settled on the Urban Ninja concept. This involved a bit a sketching, lighting design, wardrobe, post-processing, but the most important part was the visual pose of the model. Why is the pose so important when creating a dramatic action image? Because photography is just a fake representation of reality, and the more realistic and powerful the emotional message, the more unique your image will be. The whole point of weapons (swords or guns) is to inflict irreversible bodily harm onto another human being or animal. The purpose is to kill. You can read all the Sun Tzu you want, recite all the Samurai poetry you can remember, imagine valiant soldiers as warrior poets transplanted from killing fields in Scotland and Thermopylae, but weapons are simple extensions of the body, meant to draw blood. The actions from the warrior are pure intentions to kill before being killed. We’ve dressed this up in popular media and comic books, but the point is that the body should communicate a sense of power and desire to inflict bodily harm, to kill someone else. Otherwise, there’s no reason for the sword/gun/weapon to be in the image. And therein exists the heart of the dramatic action image. 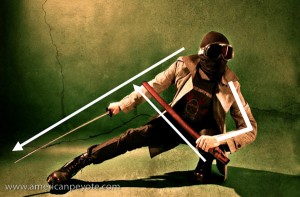 The dramatic pose has evolved and reached a pinnacle of artistic expression in comic books and graphic novels. In these static mediums you have to communicate the dramatic action in just a few static frames, but give the reader a sense of danger and adrenaline. So what can a photographer learn from comics books? Many things my children; color palette, posing, attention to detail. Recently a number of graphic novels have found their way to the silver screen, among these latest attempts, Watchmen and 300 have been the best adaptations, which really capture the drama of a graphic novel in the fluid movement of a feature film. The basic premise when designing the pose of your subject is to ensure that there’s a connection between the weapon and the model. If you hand some random person a sword and say action there’s a very good chance you’ll just get an awkward image of a person with a sword. The Katana is a beautifully curved piece of steel, which needs to flow with, and be a part of (because it is simply an extension of) the body of your model. Portray it in any other way and you end up with something which doesn’t look genuine. It’ll look forced, fake, and a viewer will pick up on that. Something will click in their mind and they’ll think, “no, that’s not right.” If your viewer doesn’t intuitively feel themselves drawn into the image, and don’t believe that they are Uma Thurman wielding a Samurai sword, then the photograph has failed. So what are the specific mechanics of the dramatic pose? 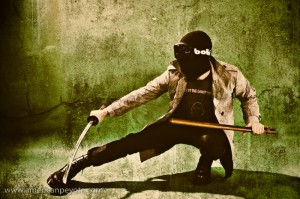 Naturally these mechanics of posing will change for whatever crazy weapon you ask your model to hold, but here are the basics from the comics and my own experiences. Think about a body, think about a body holding a sword and about to decapitate someone. The body moves from the center of gravity, from the Chi center of the warrior. If you don’t respect this notion then your model will look unbalanced, your ninja will look like a drunk Halloween party-goer, and the result will be sub-par. Momentum moves from the center of the body, which is generally taken to be at the center of gravity, near the abdomen. Force is translated to the legs and reaction forces move through the arms, but as any dancer knows (and I a-love-a the techno dance nights) it starts from the center of the body. With a ninja concept, the Katana follows the curve of the body as it moves in space. Therefore, the relationship between the legs, arms, body center, and sword is very important. It seems most dramatic to capture this relationship at the two extremes: when a person is recoiled, ready to explode, or at the end of the action, after the head has been decapitated and is flying through the air. That’s the way they do it at Marvel and D.C. Comics. Let’s look at a few screen shots of 300 and Watchmen to illustrate the concept. 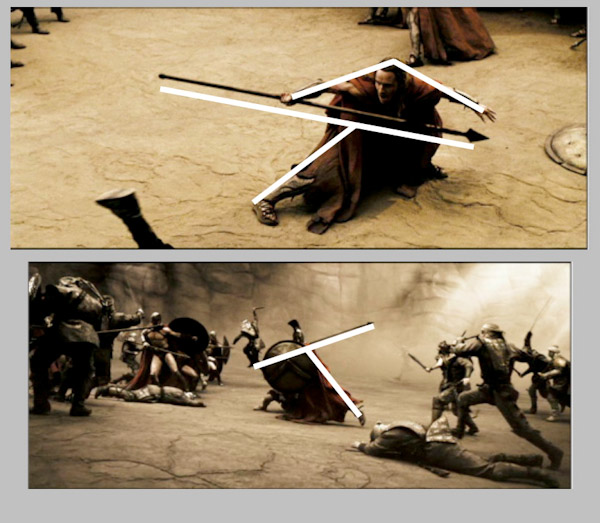 So what do we see? We see King Leonidas of Sparta at the pinnacle of recoil, (bottom image) about to bring down a wicked spear-death on some poor Persian bastard who got send to the front-lines. Look at the lines of the body and the weapon. The line of the legs from the ground to the connection to the spear is very angular, nearly 90 degrees. Look at Stelios (top image), recoiled in a defensive position just after killing the representative of Xerxes. The line of the legs to the spear are very hard (although more difficult to see here) and prominent. Look at the geometric position of Rorschach (shown below) when he’s crouched on what’s left of the Comedian’s window. Actually, the lines are very similar to the Kanji for the Shibuya train station in Tokyo. Coincidence? Yes, of course. There is no magic formula to the Universe. There is no hard rule, but some loose patterns do seem to possibly exist. 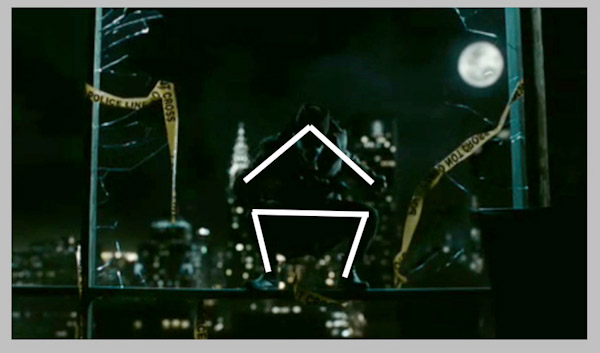 I interpret it this way, harder angles generally tend to  communicate a sense of strength and power. If you look at a the lines of two people having sex, the lines of the bodies are all interconnected and chaotic, because that is the point of extreme vulnerability. Think of the lines of a nude image, one meant to express sensuality. The lines of the body in a traditional nude will be very subtle. What do we see from Art history? Lets consider the connection between humanity and God (or whatever the interpretation is) from Michaelangelo. God stretches out in a subtle way towards Man (feel free to interpret as Wo(man) as well). The lines are relaxed and not very hard. You get more a sense of calm (of course the lighting has an effect as well), which is far different from 300 and Watchmen. Even if a Katana were thrown into the mix between Adam and the Creator, it wouldn’t come across as a dramatic expression of rage. I’m not an Art historian or an illustrator, I’m a Doctor of Science, and these are just the patterns my mind has picked up on. 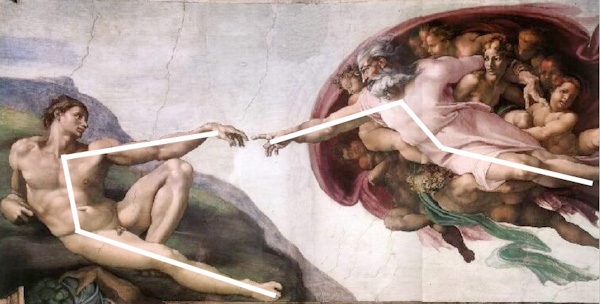 So, if you’re interested in creating a hard-dramatic image, consider the pose first. It will help define the overall tone and drama of the image. From the pose flows the intention of the subject, to love or kill, and if you form a good basis here, the resulting image will better communicate the drama and emotions you originally intended. Or, you could just put a gun in a picture and the result will likely be a generic, uninteresting image of a gun and some person.