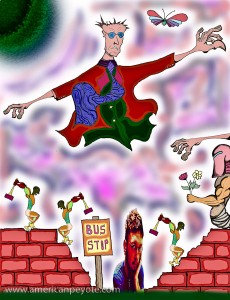 Photoshop is one of the coolest, most influential programs I’ve used in my computer life. Before I had a digital camera I had a Mac Cube, that beautifully designed simplistic computer which has never been equaled for elegance and class. It was a good time, I put contact paper on my walls and wrote on them whenever an idea took hold. Poetry, philosophy, thoughts on existence, everything that came into my head. The problem with drawing on static walls is that the ideas and pictures become locked in a certain place, a specific arrangement. Photoshop freed me from that. As soon as I got Photoshop I knew it would be pointless to use it with a mouse and picked up a Wacom Graphire tablet for $80 or something. From there I started experimenting with combining sketches and doing the color digitally.

In retrospect, it’s obvious that my background in Photoshop learning started in my Math, History, English, and Chemical Engineering classes. I wouldn’t say I was totally bored in school, but y=mx+b doesn’t need to fill the entire brain, and the vast expanse not consumed by redundant analysis of the Scarlet Letter were used to draw various things in my class notes. The problem is that you then have to run through old homework assignments on colloids to find that cool sketch of a screaming head, and much like Ulysses for writing, Photoshop has been great for giving life to random class sketches.

With Photoshop, a scanner, and a Wacom tablet, I knew I had it made. My first real attempt at creating something was a composite of hand-drawn sketches scanned with a Microtek machine and manipulated on screen. I included a portrait, taken during a biomedical engineering student meeting at Michigan State University (MSU). Somehow I guess it was the precursor to the current self-portraits on Flickr and my website. 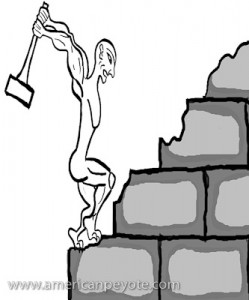 I called this first thing “Perspective” I guess because, well, I have no idea. I was introduced to Pink Floyd: The Wall during this time, so it made sense to include a brick type structure, which was being demolished by small worker guys with devil legs and no hair on their heads. I also like the look of Marvel and Magneto from the X-men, so I added something with muscles and a cool Spartan helmet. It started as a few separate hand sketches which were digitized, and then colored in Photoshop.

Here was the workflow:

Draw random stuff
Scan sketches with flatbed scanner
Open in Photoshop
Cut up the sketches, just taking the ones I like
Assemble sketches so they sort of fit together
Ink over with a Photoshop brush
Expand and draw other strange images
Add color on separate layers for everything
Save and forget about for 8 years 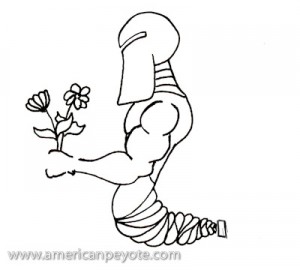 It’s been cool to look at what I do now with a sweet camera like the Sony A900 and what you can do today with Photoshop, and compare it to what I was doing nearly a decade ago in my apartment. What I edit photos today, it’s always with a Wacom tablet, adding to the shadows, manipulating the density of darkness on arms and cheek bones, using the exact same drawing techniques developed in Geometry class when I thought of how cool it would be to draw an issue of the Punisher. Photoshop is a sweet program, but like Altair Hypermesh, it hasn’t changed much in the past 10 years. There have been some essential changes, but the core philosophy has stayed the same. If you have a cool idea and some drive, you can create some tripped out stuff. It’s just the drive to create which is important and will propell you forward, not matter if you’re working on Smart Materials, a photo shoot, or a sketch during a chemical engineering class.