Editor’s Note: The following words have been writing themselves for over a year, but the author is a lazy one and finally we had to shackle him to a coffee shop table in a location just out side Zurich, Switzerland and beat the sentences out of him. This is the first in a series (which were promised us), and who knows what we’ll have to do to get the last installments written. 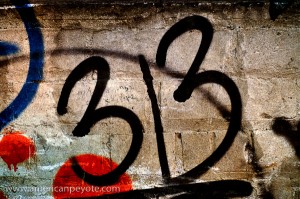 I’ve been to many cities in the world. Zurich, Berlin, Tokyo, Barcelona, La Paz, San Diego, Paris, Geneva, Budapest, Krakow, and the one that always sticks in my mind is Detroit. I love cities that inspire me – they stay in my head and energize my being in ways that other places just “don’t”. Each place is different and everyone is special, but Detroit is the one which sticks in my mind. Detroit inspires me. Detroit feeds my soul. I’ve been living in Switzerland for nearly 6 years now, but I was born in Detroit and I grew up in Michigan, in the suburbs of the City. As such I lived in a State with a divided society. When you grow up in the suburbs you spend your days in strip malls and communities like Birmingham, Royal Oak, Ferndale and all the satellite metro areas. These places aren’t bad (although down right evil from a city planning standpoint), Royal Oak was a cool alternative area during the 80’s with punks in mowhalks standing on the street corners. The place got “civilized” in the 90’s and the cool alternative scene eventually moved to Ferndale, although the “feeling” remains.

The perception of Detroit is one of failure and vulgar fear for the suburbanite. Many who live in the burbs work in Detroit and head out to the occasional Tigers, Lions, or Red Wings game, but the city is not a central part of the Michigan experience – which is sad. Detroit is one of the few beacons of real idea exchange and thought evolution in the suburban urban-sprawl hell of Michigan. In general Detroit invokes fear – fear of the place. After living in Switzerland for five years and visiting Michigan a few times here and there I realized what a pathetic connection I have to the city, so during Dec. 2008/Jan. 2009 I decided to be a Tourist in Detroit, and started filling a Moleskin journal with scribbles and impressions.

Winter probably isn’t the best time to vacation in Detroit, but it was one of the most fantastic trips of my life so far, and I’m going back for more. I stayed at my parent’s house in the burbs and tooled around Detroit during the days and nights for a week. I was at an advantage, my friend works at the Detroit Free Press and she introduced me to Jeanette Pierce, who helps run INSIDE DETROIT. In short, I was hooked up. INSIDE DETROIT is an essential doorway into the coolest parts of the city. The biggest problem with tourism in Detroit is that no one from the outside knows where to go or what to do. Detroit was developed around the automobile as a mode of transportation, and for this reason, the city is very spread out. If you don’t know where to go, it’s a little hard to just tool around and explore (although I do as that’s my “thing”). INSIDE DETROIT was setup to fix that, and it is very effective in communicating what to do and giving alternative tours of the city. I generally hate generic city tours. I’ve been on a horridly boring group tour of Florence, and despise the spoon-fed cultural education of listening to someone lecture to me in a city square. The coolest city tours I’ve been on were in Berlin and Detroit. Fat Tire provides an excellent bike tour of the city and Berlin After Dark gives the ignorant night seeker an excellent experience of Berlin nightlife and clubs (including free shots on the trains). I got the same sense of alternative expression and unplanned for inspiration and adventure on the Inside Detroit tour I did. Basically I spent New Year’s Eve on a Detroit bar tour. We hit up three different places and ended up at the Filmore Auditorium to ring in the new year. I Never had to find the Real Detroit. You stand in greatness here, not the shadow of what was (like in Paris) or what will never be (like in Tokyo), but stark and undeniable greatness (as in Berlin). I don’t say this of every city. Geneva is beautiful, but it doesn’t carry the same weight as Detroit. Tokyo is full of eye candy, but lacks the soul I feel in the Motor City.

What does it mean to find the real city? I once had a horrible pizza in Sienna, the little city in Italy where they have the horse race in the city square, now even more famous from the opening scene in Quantum of Solace. People tell me I should go to a local place, not a tourist restaurant to eat. But what do I know, I’m just there for a few hours. I never have to worry about finding the real Detroit, it’s all real, and out there for the tourist to experience and be inspired by. Where is the Real Paris? The Real Florence? Is the Real Milan defined by the churches no one really prays in any more? Search hard enough and you might find the real Prague between the hookers and gelato stands. You can visit some cities and never find the real place – just the manufactured tourist areas. In the real city you don’t have to worry about being fleeced with tourist prices for a coffee or being annoyed by professional beggars. If people ask for money on a street corner in Detroit, it’s probably because the genuinely need it. 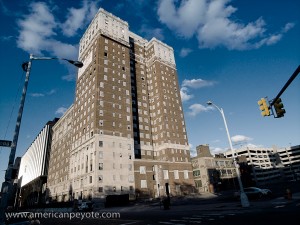 You can write a lot of vile things about Detroit, you can cite the riots of 1967, just like you can cite the Final Four riots at Michigan State University. I don’t really understand it. In Zurich there’s the occasional soccer riot, sometimes the fans get crazy every other weekend. The police come out, the tear gas is launched, the crowds are dispersed. Are riots a bad thing? Yes, they happen anywhere and everywhere and like avalanches it’s just best to get out of the way when they’re coming down on you and move on with your life afterwards.

I’ve been through many parts of the world, sometimes I get the feeling that I have no center, no place that calls back to me and that I always feel 100% comfortable in. But that’s the point, to take yourself from your comfortable living environment and place your body and mind in a new sphere of experiences. I’ve aimlessly wandered the corridors of Europe, I’ve walked around the peaks of Bolivia, slept on the White Sands of New Mexico, watched the sunset and then the sunrise from atop Mt. Fuji, jumped off cliffs in Greece and ate tempura in Osaka. But Detroit, this city is a special place in the world.

There is a feeling of determination when I walk the streets of Detroit. I get a sense of enlightenment when I look up towards the sky. The music, the people, the bars, the buildings, the food, it all comes together and floors me when I drive down Grand Blvd. I’ll take DEMF over the Zurich Street Parade and the pastisio in Greek Town over the offerings in Athens (I’m not the only one). The only other city with such a sense of ghosts and recent history echoing the streets is Berlin. The inertia I feel in these two population centers sticks with me, it inspires, it invokes philosophy, and it gives me a center in the world.

Editor’s Note: This was only the first installmet, Detroit City of Inspiration and a Tourist in Detroit articles are being written and rewritten, the photos are being edited and publishing deadlines have been set in limestone. 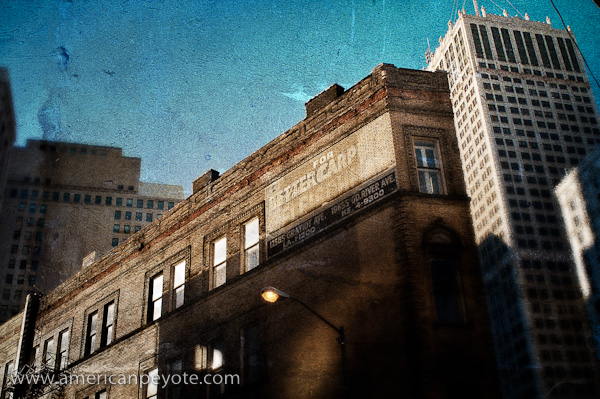 2 thoughts on “A Tourist in Detroit – the Real City”