The pertinent question is not why I’m walking around Bern with a giant fucking chainsaw in hand on a fine 1st of August Sunday morning. No, the question is, why are you empty handed? The 1st of August is the national day in Switzerland, like the 4th of July in America. I was in Bern for the famous flea market, on the hunt for a fine rusted chainsaw.

I’ve been in the market for a dilapidated old, rusted Texas Chainsaw Massacare type device for some time now.  I had actually found the perfect specimen back in May at the Bern Flohmarkt, and chocked on the price. The seller was a Turk who originally wanted 120 Swiss Francs for a rusted machine that probably didn’t even run. Upon hearing his offer (translated into German by his colleague) I instinctively laughed out loud and turned to walk away. I knew the price would be absurd, because the guy who was translating could barely keep a straight face when broached the offer. After I stopped laughing we bartered and I got him down to 80 CHF. However, I tuned the final offer down on principle and had regretted it ever since. I ended up spending my money on some Hunter S. Thompson literature from some hippies instead. So, with this regret in my mind, this time when I found my precious I paid the 80 CHF without hesitation and got two vintage 80’s walkie-talkies thrown in for free (that’s the way I see it). This time the seller was Swiss, and I think he was surprised that I bought the Beast without haggling over the price.

The Beast is all metal, light blue on the outer frame, grimy like the village drunk and heavy like a life filled with regret.  It could be a bit more rusted around the chain, but otherwise it’s perfect. It even leaks oil and has an exposed spark plug on the top. 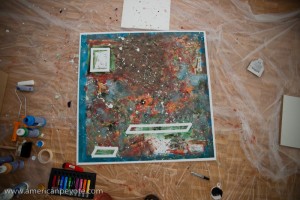 Why do I need an old chainsaw you ask? I’m developing on a new photo project I’m calling ArtDeath, KunstTod, ArtMord, or some variation of those. I’m not sure on the exact naming yet, but the vision is clear. The central point is that the artist needs to destroy his creations to set her soul free to create new pieces. I do 1m x 1m square paintings, and it seems like destroying these with a giant chainsaw is the thing to do. Naturally the event will be photographed, and I’ll need to organize some models and hire a cool MUA like bPerfect. Plus, the Blue Beast will be perfect to pair with models like Demari or Jurgita.

Now, for model shoots I’ll have to remove the motor of course. We can’t have people dropping the Big Blue Beast on their toes or fingers, or not even being able to lift it to start with. Even I have some problems swinging the thing around, and I see now why loggers are such beefy, burly men. It’s got that certain tank-like build where you know it’ll take whatever beating you subject it to and still run like an well-designed piece of machinery.