I may have Asperger’s syndrome – or at least that’s the rumor I’ve heard, well it was suggested at one one time. I figured it probably wasn’t totally outside the realm of fiction, so I decided to check it out. A time for self-exploration and reflection. I did some online video research and checked out videos of folks with Asperger’s and the like and a Wikipedia entry on the subject.

With Asperger’s people are considered to be smart, getting all focused and researching something to death like memorizing all the planes the British and Germans flew during World War II or rock formation history, or some other topic than a number of other people in the world probably don’t care about at all. I can identify with such freakishness, it makes perfect sense to me.

A person with Asperger’s is supposedly not interested in social communication, or doesn’t know they’re supposed to be, or just don’t find an essential value in it. The social skills need to be learned, like they’re not programmed in from the start in your brain (and why should they be? Are they essential in the hunter gatherer sense of the world?). So, you then have to take more time to learn the fine details of social interaction if you have the syndrome. Again, I fit into this characterization in many ways.

I like learning about stuff, in particular about stuff that’s useful for something – or maybe not. Maybe it will be useful but I just want to know just because. Like, say we take indy movie making for example. I watched Vincent LaForet on CreativeLive talk about film tools and movie making. I get intrigued so I go out, research different camera systems, lighting methods with LED, cost-effective steady cam systems, sliders, follow-focus devices, camera rigs, I acquire a sort of deep body of knowledge on a subject. And then what? Maybe I do nothing, but maybe I go and shoot something. Why? Because I feel compelled to tell a story, to say something. Plus I know that video-based story telling is how we’ll be communicating in the post-Facebook world, so why not get a head start? I have the need to communicate and to express ideas to people outside of my head, in the real world. I think that if I had Asperger’s, I would just learn all about every camera sensor in every camera, and that would be it. I like learning about random things because I want to have the background and use this knowledge later on. There’s a deep difference between acquiring and utilizing knowledge and technology. I like to acquire so I can use, not acquire so that I know. So, maybe I don’t have Asperger’s. 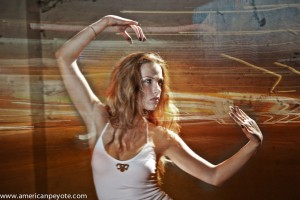 I did the same thing with still photography. I learned a lot on the internet from reading Strobist and watching Photoshop and shooting tutorials by Joey Lawrence, but then I used that info to bring up the production value of my photo shoots and post-processing art. So now I create portraits that are more like paintings. Since still photography isn’t enough, I’m adding film to the mix (because once I thought it would be good to learn about).

Another example, I’m learning about HTML5 and augmented reality right now. There are people who think that code is poetry and they can read Python like any other language, and that it’s one of the most beautiful things in the world. That’s fine, but while a I appreciate and respect that view, I don’t share it on an intimate level. I naturally prefer poetry in words, not hash tags. I love learning about web coding, but not because I find it intuitively beautiful (well, no, I do on some level), but rather because I can use it to create cross-platform applications for iPhone and Android devices, using APIs to call in data and use it all in a mobile application that communicates an idea (like photography or film or painting).

I just like to acquire tools to do interesting things. The technology barrier to entry has been brought down so low in subjects like music, physics, motion tracking, game design, film, writing, data analysis, etc. that everyone with a crappy computer (or a decent tablet) and a camera or whatever can do an insane amount of creating in life for very low financial investments. We’re just limited by time and attention spans. In the end I’m just interested in too many things, how can you not be? Today is filled with an unimaginable assortment of possibilities, I find it abnormal when people don’t have the drive to explore life and experiment with all the amazing technologies we have to play with on our computer screens, iPhones, cameras, 3D printers, cheap paints, Arduinos, sensor networks, big data sets, and composite snowboards (to name a very, very, few).

So, do I have Asperger’s? I’m leaning towards no, but I guess I have a bit of the necessary ingredients. Now clearly, self-diagnosis doesn’t work for everyone (except for Freud), and an impartial review might be in order. However, I dated a psychiatrist for half a year once, and I now that I think about she probably would have diagnosed me if I was. If you think I have Asperger’s, feel free to drop me a line.

2 thoughts on “I May Have Asperger’s”