Rumors are starting to abound of an A900 replacement coming in 2011 (I think) – named the mystic A950 with a new 30 megapixel+ sensor and either a SLT or traditional optical viewfinder design. I heard this from a guy who has a brother who has a friend who works at Sony R&D and he read this rumor on SonyAlphaRumors. Having shot the past year or so with my A900, I have an idea of what the A950 does and doesn’t need. I’ve used the A900 for various needs including weddings, studio portraits, documenting the painting process, grafitti shooting, Bratz dolls, Lego animation, etc. The A900 basically rocks, and only needs a few tweaks to be awesome. What are the deal breakers on the A900 replacement?

First off, live view is a deal-breaker on the A950. Deal Breaker is a word combination that I hate to write or read (I just felt some bile erupt in my innards at the sound in my head). People throw it around on forums everyday and when you look at the crap these people shoot it’s obvious that they only care about writing useless crap on the internet. But, live view is a deal-breaker on the A900 replacement. Why? Simply because live view dramatically increases the usefulness of a digital still camera.

As a stills device the A900 is awesome, but for shooting macro images or with manual focus lenses, the A900 sucks. Yes, it has a nice large viewfinder (for a DSLR), but the cheaper cameras like the NEX5 and every other DSLR now on the market have this very basic feature of previewing the image before it’s made in real time. Getting accurate focus and framing is just more precise on a large LCD than on a large DSLR focusing screen. It’s also nice for framing an image when you have the camera above your head or down low or at a weird angle. Live view is just a great feature if implemented correctly, and it’s a critical feature to have. Live view means precise macro focusing. It means precise focusing with manual lenses. It means the ability to enable remote camera operation from things like iPads, iPhones and computers (although I think Sony also needs to release a decent SDK for this to happen). Live view helps to frame images when your eye can’t be level with the viewfinder. Live view is needed on the A950 – period.

Take note however, Live View and Intelligent Preview should both be there. Intelligent preview is used to make a temporary image which is displayed on the LCD but not saved to the memory card. I love intelligent preview for quickly checking lighting and histograms in the studio. It’s needed because live view is useless for studio photography when external strobes are used. I use intelligent preview all the time in the studio to quickly preview the scene without taking a full image. And yes, it does make a difference, I don’t want to shoot a full-sized real image and have it saved to my memory card just to visualize lighting and to check the exposure histogram. Intelligent Preview is better for images made using strobes. Live view is needed for everything else. 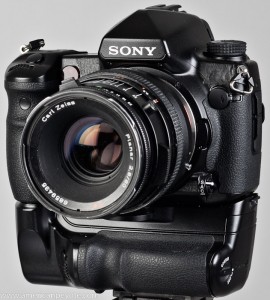 Look, yes, I know and appreciate the difference between stills and video. I bought a VG10 because it’s a proper video camera, not a stills camera that needs to be upgraded to a video device. Video is needed, but not in the same sense as live view, and no, putting the 24p 1080HD video option in an A950 will not kill the new CineAlta F3 or NXCAM cameras. The Canon 5D-II and other popular video DSLRs are being used to make movies because no other device is there to fill that niche, which is why Sony released the CineAlta F3 and the new NEX NXCAM. The F3 is for high-end Indy films and professional digital cinema. The NXCAM model is for Pro video, and there’s the VG10 for consumer video. People are not going to be buying the A950 instead of the new high-end video cameras to shoot movies with. People want to shoot video with video cameras, not giant DSLR rigs that look like baby transformers and have horrible moire performance. That’s why Panasonic is selling the AF100, why RED developed the Scarlet and Epic concepts, and why Sony released the VG10 (and will be releasing the Pro-NEX NXCAM). A video capable A900 would be an awesome compliment the my VG10. Video isn’t a deal-breaker in the A950, but it needs to be there.

The A950 needs the ability to autoexpose in aperture or shutter speed priority modes when manual lenses are attached to the camera. With a manual focus lens you only have the option to shoot in full manual exposure mode with the A900. This sucks and is purely a firmware issue that should’ve been fixed years ago (and could be fixed by a new A900 firmware). I should be able to put a lens on the camera, adjust the aperture on the lens, and have the camera choose the shutter speed and ISO for a correct exposure, just like I can on my NEX-VG10. Without this basic function, your ability to use the camera is limited because you have to adjust the shutter to match the aperture you use. Even my old Minolta 7D chooses the correct shutter speed for an ideal exposure with a manual focus lens attached. It’s a very basic feature and should be a function on any camera body. One reason the NEX line is so popular is that people can use whatever lenses they want on their body (with adapters). This adds to the value of the camera, and it should be the same on the A900 replacement. Focus confirmation on manual focus lenses should also exist. Sure you might need to add an electrical interface to the lens, but this is possible with Canon and Nikon and their built-in rangefinder designs. It just makes the camera better. It’s useful when manual focusing with Sony/Zeiss autofocus lenses and as well old manual focus devices, it’s not a must, but would be awesome.

If the STL viewfinder works as well as an optical one does and improves the user experience, then it should be there. Currently, the A33 and A55 do not do this. With the SLT cameras (and with the NEX-VG10) it’s very difficult to use the cameras in the studio with off-camera flashes. The reason is that the electronic viewfinders try to depict the scene according to the manual exposure the photographer sets on the camera, but this of course doesn’t account for the power output of the flashes that will go off when the shutter button is pushed. The resulting live view image is a black screen when I shoot in my studio with the VG10. This makes framing the shot very difficult and is also a rather huge deal-breaker because it severely limits the use of the camera on shoots. I like having an optical viewfinder because I can easily frame the shot (even if the camera isn’t turned on). What I’m hoping is that Sony will develop a dual-system hybrid view-finder, similar to the Fuji compact camera shown at Photokina 2010. Rumors suggest this will be available on the coming NEX7, and would actually make for a very nice addition to the A950 design.

So, basically the A900 replacement needs: Live View, HD video and non-crippled manual exposure mode. If there’s a better viewfinder design than the current one that would be great, but it needs to be better than the A33/A55 design. A rangefinder should also be integrated to help manual focusing, but it’s not a deal-breaker.

Sony has released a firmware update for the A850/A900 which addresses the exposure issue with manual lenses. The update includes the following:

Faster autofocus, extended the range of exposure value (EV) compensation to increased to ±5EV, exposure bracketing range has been increased to a maximum of 6.0EV (-3EV, 0EV, +3EV). The A900 and A850 firmware updates are available on various Sony support websites, including http://support.sony-europe.com/dime/DSLR/dslr.aspx.