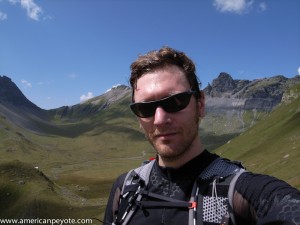 Since running the 2011 SwissAlpine K42 marathon (and deciding the morning after to do the Jungfrau marathon) I’ve begun amassing mountain runs around Switzerland. These little adventures, or fast hiking exercises, I’m not sure what the current marketing concept is from Salomon, I guess I just like going from point A to B as fast as possible (hence the running) in the Swiss alpine environment. Afterall, you don’t need the organization of an actual marathon event to enjoy some trail running. In this edition, I present the run from Elm to Linthal over the Richetlipass.

I didn’t really intend on doing this trip, originally I wanted to go from Steinibach. to Linthal, but I took the wrong bus and ended up in Elm Dorf at 977m. I considered just running over the Segnaspass to Flims-Laax, but the trail was closed and the route to Linthal over the Richetlipass at 2261m was now the only option for getting out of the valley. According to the signs it’s an eight hour hike as you ascend up a beautiful valley and then negotiate some alpine terrain before descending down and finding the train station on the opposite side. The local drum band might be practicing along the path, and you’ll pass by a few award winning milk producers, who proudly display their achievements on their barns. This initial ascent continues for a few kilometers, and gradually beings rising as the mountain peaks come into view. 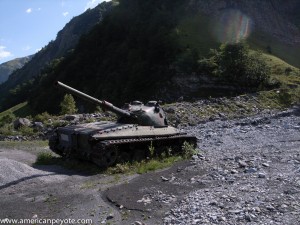 Soon the mountain panorama beings to reveal itself, and if you do the run on the right day of the week, you’ll now quite clearly discern the sound of artillery fire reverberating off the mountain walls. That’s not some sort of acoustic trickery, at the end of the valley there’s a Swiss Army tank base, officially named Schiessplatz Wichlen. Yes, a bonafide panzer firing range in fact, where locals and army fanatics can drop by to watch the Swiss tanks train their shooting skills. Being a fun-loving explosion boy I also wanted to check out the experience, but I also wanted to not miss the last train from Linthal. I did however, stop to take photos with my Ricoh GRD of the old panzer rusting in front of the base. From here you just follow the signs down the road a bit, then hang a left and begin the ascent to the Ski hutte. As a side note, if you’re running here don’t pick up any random tank shells you might find along the trail. 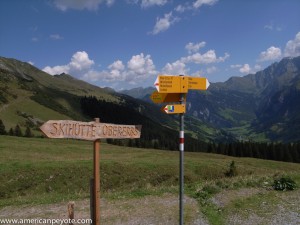 I stopped at the ski hut for a drink and enjoyed a Sinola, a type of Coca-Cola imitation. I got rid of the carbonation of course, stayed for a few minutes and then pressed on. Beyond the hut you’re on mountain trails heading up to the pass. The alpine sun was high and strong this day – and my body is tuned for cold-weather endurance. It’s just a few hundred meter assent, really just a short Swiss mountain jog up to the pass and then down the other side (sort of).

I began ascending up and up along the trail. The higher ridges that seemed a world a way a few hours ago were now just above me and I was headed to the top of their backbone. Beyond the first ridge you have to descend down, and enjoy a fantastic alpine amphitheater, peaks filling 180 degrees of your vision. I stopped to shoot a panorama and then continued on. There’s another hut along the way, and on a fine sunny Saturday expect to say Gruezi to men with large white beards enjoying large steins of beer in the hot alpine sun. There’s a giant boulder, about halfway between the amphitheater ridges, and I stopped for a climbing break. The Salomon Crossman shoes sort of suck for rock climbing, but the boulder is easy enough to play around on without killing yourself. I like mountain running for the environment, and if you can’t stop to enjoy it there’s no point in running through it (for me at least). 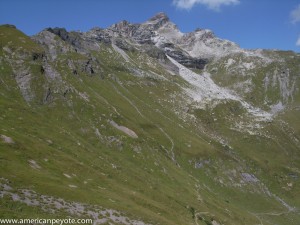 Beyond the boulder pause you have a short ascent up to the final pass. From here you can continue up the blue alpine route (no trail just a rock ridge) up to the summit, or head down to Linthal. Naturally, I wanted to do the summit, but I also wanted to be on a train by 4pm, and the summit would wait for a day when I wasn’t already low on water. The descent down to Linthal is quite steep and muddy. It basically goes straight down and if you’re not accustomed to these trails expect to go slow or trip and fall on your face. Hiking sticks are highly advisable for the descent here, it’s just grass and rock, but it’s a steep beast when the sun is high, also expect to find shrooms along the way and indulge in fantasies of fairy kingdoms getting squashed under your feet.

The final run to Linthal is a gradual downhill descent, passing through woods and next to streams fed by the melting glaciers and mountain snow. If you get tired and ask the right person you’ll get a ride on a farm tractor, but don’t plan for it. I arrived at the Linthal train station at 4:30pm, making the adventure a comfortable 6.5 hours of mountain running (and walking) with tank picture breaks, a little bouldering and a cola in between. This was the hottest run I’d ever been on and drank half a liter of mineral water at a cafe while waiting for the next train.

Looking for more info on mountain running in Switzerland? My collection of running articles is growing. 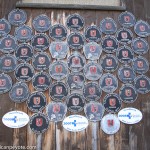 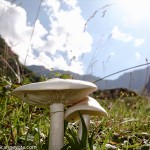 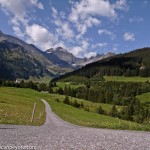 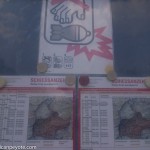 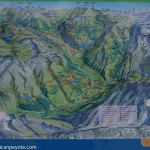 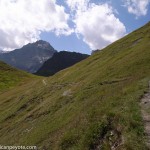 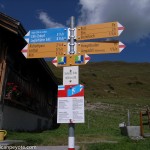 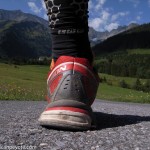