Juliette Lewis and the Licks

A number of artists bring a certain power to the stage, but I saw Juliette Lewis and the Licks bring it to the people during their show at Rohstofflager in Zurich. 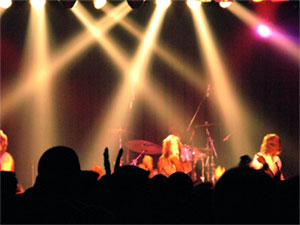 Lewis has the rather unique quality of inspiring a rabid following of male groupies, who jump through the crowd-sea with American Indian feathers around their heads – you see them rising above the waves on the shoulders of those below them.  The scene is hip, it’s energetic – visually as well as emotionally commanding.  The thing is, it doesn’t feel like she’s been molded to be a sex symbol or to embody any particular message, she exudes the pure-rocker aura that marks groups like The Doors and the White Stripes.

Interaction between an artist and the audience is tough, so much so that Pink Floyd: The Wall was written after  Roger Waters spat on a fan after a show.  Juliette is kick-ass in this way, during the Zurich show she surfed the crowd and was interacting on the level of a unique rock-star totally connected with the audience.  After the initial surfing someone’s hands where apparently too intimate because at 21:25 Juliette addressed the crowd:

"When I go out there, who’s the little fucker that tries to grab my tits?"

Her energy is something you don’t see during a main-stream multi-thousand dollar production by Justine Timberlake or even less known groups like The Spores from LA.  I checked out The Spores show when they were in Zurich.  We were packed into a maybe 40 person bar and just 5 feet from the stage.  Despite the puppet show and close proximity to the artists, I was just standing there, enjoying the music, but not being moved by it in my core.  I also had a headache and wasn’t in the mood to have the limits of my ear drums tested, but good shows should rise above such Earthly trappings. 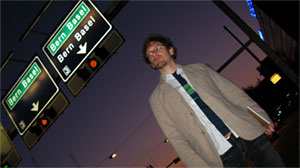 Rohstofflager was an awesome venue for the Licks.  It’s situated in the gritty industrial-club district of Zurich.  It’s a place for people to pack in and get crazy or chill out and soak up the vibes.  My girlfriend took to taking awesome photos while I recorded the night with my sketch book.

At the Licks concert I was way back by the bar and later up in the balcony with my girlfriend, far away from the madness of the stage-front; but still felt totally connected to the music, which I was hearing for the first time.  It’s not just the music, at the show you also get her personality, those bad-ass energetic attributes which made her popular in movies like From Dusk Till Dawn and Natural Born Killers.

If the Licks are coming to your town I highly recommend checking them out.  Juliette Lewis and the Licks are the real deal, pure bad-ass kick-ass rock vibes, just like the Shaman intended.