I gave talk at the 1st Ignite Zurich (Dec. 2nd at The Hub Zurich) centered on art, rarity, and what that means in the context of the internet and web technologies. A big thank you to Inês Santos Silva for organizing, the night was an awesome inspirational event. Here’s a break down of the ideas I put into my talk…

The Value of Art

What is the value of art, why is it traded for money and why is it sometime considered priceless? The value of art is a combination of traditional supply and demand, rarity, and context. you can’t assign value to art without considering the context of it’s creation. the time and place, and how it fits in with the overall context of the art scene at that particular point in time, that will never come again. Yes, it’s possible that your five year old could have painted that, but they didn’t. Art is idea execution. If you were the first person to put your shit in a can and sell it, you would eventually command a price of over 100,000 USD, but if you do it now it’s just considered a strange precousur to insanity and generally socially unacceptable.

Art is a combination of having the new idea and executing it. Art is not an idea, it is the creation of something significant, just as an idea is worthless in a startup company that doesn’t execute it well. Facebook, Google, Apple, Microsoft all executed their ideas at the right points in time, but they weren’t necessarily the first. It doesn’t matter is someone “stole” your startup idea, it matters if a company was created from that idea. That’s the execution and beauty of it. Now, at this point in time you can launch your own social network, search engine, and software company, but it won’t have the same impact, unless it brings something new and is understood to be genius in the current context of the tech scene. It doesn’t matter if you paint a new Mona Lisa, the idea is done (and overdone and redone in reproductions).

The unique thing about art is that the work gets value at any point in time so long as it fits the context of the history of an art movement, or rather is a disruption. Vincent van Gothe died barely selling a painting. If it’s not discovered and put into context it’s worthless. This is why artists get discovered later on but younger artists are promoted more than older ones when they come onto the art scene. You want the work of the young artists before they become “big” but it’s just a gamble that that will actually happen. So, logically you should create some great work and then kill yourself, because this ensures that you won’t be able to produce any more excellent art. The first person to paint grey instead of blue and red and green would be considered amazing, and all the rest that follow will just be part of the movement. Without the movement, no one cares about the first one, it has no value.

How can an artist create the context for the work to have value? Or should you just create things and hope that they have some value for other people? The Doktor of Science in me says you get to the heart of the beast and just create or engineer your own context to create value. A piece of art work is a container for an idea, it’s a physical execution of an idea that can be viewed and reinterpreted as needed by society. Nobody cares what the first design of Google looked like, we just want to use it. Maybe the first sketch will sell for a million dollars one day, like the first apple computer, but only because of the context of history. This is because on the internet content is king. People was to use the technologies of the internet, not just be influenced by the ideas.

One thing I learned from hanging out with people at the Zurch UX Book club is some of the psychology behind buying things. When things are rare, inside of you is triggered that, “buy it now” mentality. When you see there’s only a few things left in stock, you’re pressured to buy it now. This probably goes back to the natural instinct to collect things and then trade them later on for things you might want from other people, the beginnings of capitalism. So I thought, how can I create a “buy it now” context for my art? In a world of immersion and augmented reality, installations will be the containers. Will we really care if things are real or not? Will it matter if it’s the real Mona Lisa or not? The experience will probably become more and more necessary to have an impact, but we’re not there just yet. 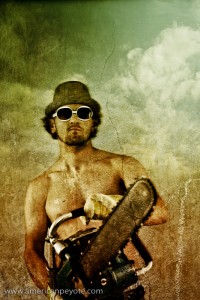 The Art Death concept is an auction platform idea I started putting together after taking a professional artist seminar at the F&F Kunst Schule with Olga Stefan. To combine the ideas of art with value related to context and the percieved value of art increasing due to psychological tendencies related to rarity, the best thing is to create an auction where the context of value is engineered into the platform, or rather, the performance.

I can accomplish this by putting up my art for auction on a combined internet and real world platform, having a reserve bid for each piece and a time constraint. If the work doesn’t sell for the reserve price, I have to destroy it personally with various dramatic methods. Like taking a rusty chainsaw or a flame thrower and purifiying the world of my mistakes that don’t sell because they have no value to society. It will take some preparation to do this thing right, and I think some fundraising via Kickstarter is in order.