American Peyote
18 Mar ’07ClimbingKandersteg, mountaineering, Switzerland
For some reason the pressure cooker was working harder on my head than normal.  Probably something to do with writing my dissertation, trying to find a job, and organizing a research trip to Japan.  In any event I felt a need get out of Zurich for the day.  So I took a personal day and shifted the weekend foreword by one day.  Friday morning I got out of bed at 4:30 and biked to my girlfriend’s place to retrieve the trekking poles I had forgotten there.  An hour later I was heading to Zurich and then on to Kandersteg. 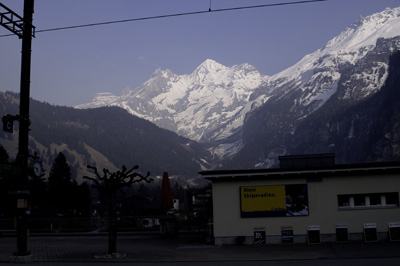 Of all the mountain valleys in all the regions I’ve visited, the view from the Kandersteg train station is one of the coolest in the world if you’re looking to get into the thin air.  The Blumesaple rises at the end of the valley like a fortress of mythic bygone kings.  You think of monasteries in the Himalayas and tales of adventure and journeys through time.  I was up at the Bluesalp before, the hut there is one of the highest at 2800m, and even has it’s own T-shirt for sale.  This time I took the cable car up to the opposite side, along the route leading to the Gemmi pass.  Three weeks ago the avalanche conditions were about a 4 out of 5 in this region and the cable car from Leukerbad to the Gemmi Pass wasn’t even working. 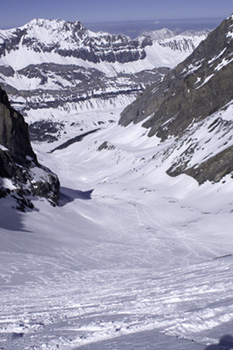 But these were now bright, stable, low avalanche days.  I took the first cable car up, half of my fellow travelers were 60 something, since this is what many Swiss senior citizens do to pass the time.  The rest were back-country skiers and one pair that had their ice climbing gear.  I took the well-groomed walking path for a bout a mile before taking an extreme left and strapped on my snowshoes for the ascent.  My goal was the Rinderhorn, an easy 3200m peak which, given the agreeable weather, wouldn’t be an avalanche factory.

The other people on the ascent were all skiers, and probably had stayed in the hotel the night before.  Yes, there’s a hotel at the Gemmi pass, sitting there at just over 2000m above sea level.

Every excursion into the Alps looks good on paper.  The topographic map does little to convey the physical power needed to ascent the slopes.  I looked up and the skiers were as ants on a white hill.  I cursed them for being so fast and wished I had bought that touring ski-snowboard for the season.  The skiers came down, some in perfect tight turns and some looked as though they were just concentrating on not crashing and looking the ski-fool.

Soon I was alone and the incline took the inevitable turn to the extreme.  These are the features I never get from maps, at first it looks find and you think, "yeah, sure, no problem."  The thing is, all I had for breakfast was some birchelmuseli and a coffee; then two white-bread sandwiches, one salami and one cheese.  This is not what one would consider a healthy breakfast for one who needs to ascend 1000m on foot.
Below the ridge is the worst, the mind start asking the logical question "why am I here?"  Does the last 30 meters really mean that much?  I’ve come most of the way, it’s been a nice hike, why not go down, avoid the last extreme slope the… 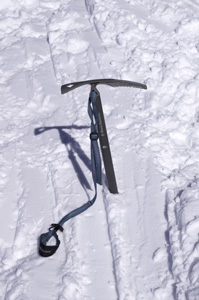 Then you look up and the sun crests over the ridge and you can almost see the cool blue expanse beyond, that vista, that fleeting moment that draws from your bed at 4am.  The slope was too steep for snowshoes and I put on my Grivel crampons – at last getting to use my climbing gear for something besides a photo shoot.

The last 20 meters were an amazing lesson in perseverance.  My energy was gone, because given my pitifully breakfast, I was hiking on empty.  The snow was now hard and my spikes bit in and held firm.  I was pouring sweat inside and thought my heart might explode.  You just focus on your feet and keep moving…a few minutes later you crest the ridge and realize anew why you came.

The Rinderhorn is one the easiest mid-alpine peaks, the cable-car gets you most of the way and then it’s just up the slope.  So I was confused when I looked at the map and saw an easy route, but looked at reality and saw a rather intense 30-40m rock climb to the summit.  It was no matter, I had to be down for the last cable car and it was already 1pm.  I was in fact, standing on the ridge to the Balmhorm, slightly higher at 3600m, it would take far too long to summit and get back down. 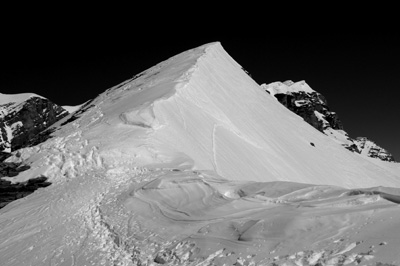 On the descent I became slightly aware that I was standing on a 50 deg slope without an avalanche beacon and no one to hear me scream.  Not that I would, screaming is a waste of energy, and when a mountain is bearing down, you run like hell because it’s what your survival instincts say is needed.
I imagined the mountain letting loose and rushing at me, pulling me down into the valley.  I probably could’ve ridden the bastard out.  As long as you stay on top you’ll survive.  But fear swam through my blood.  Now in these older years I could feel it.  I had no desire to leave this life so soon. 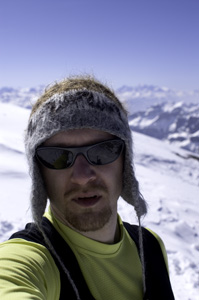 One thought on “A Personal Day in the Alps”