10,000 years ago, in the hunter-gatherer sense of our history, moving and beating the body to it’s core was needed for survival, so it is no surprise that some humans are not yet evolved enough sit in an office every day.

Bös Fulen is neither incredibly difficult, nor is deceptively easy to summit.  It’s the mountain to climb when you need to get away and are looking for a nice green – field – glacier – alpine climb for the day.

The starting point is Braunwald, situated at just over 1256 m it’s accessible by train in about two hours from Zurich. 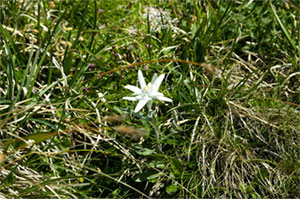 Along the way we walked through the green fields and yellow and purple alpine flowers and came upon a group of four edelweiss.  The reclusive Alpine flower is placed on pretty much everything from hotel names, climbing stores, airplanes, and most souvenirs from Appenzeller, but are so rare that most people have never seen them in real life. 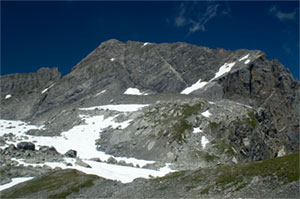 The summit of Bös Fulen is reached at 2801 m, after first climbing the glacier as high as possible, followed by free climbing the rock face.  You might find an old rusted piton here and there along the climb, but the hand holds are enough for one to feel secure. 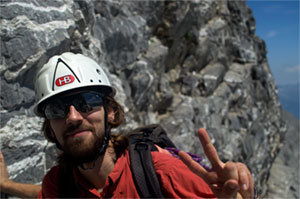 There’s a bit of a scree field before the summit, and the keen climber will wait for those teams climbing ahead to summit before following the same line.  The alternative is to duck falling rocks and pray that one doesn’t take your fool head off. 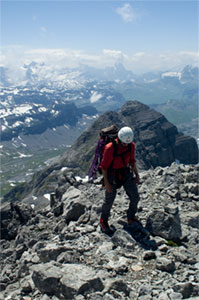 Although it looked like a rather exhausting climb from below, the actual ascent was probably only like half an hour.  The hand-holds are bomber and the foot edges are wide enough to dance on. 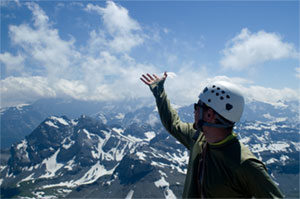 The view from the summit is rather spectacular.  All the eastern alps are around, the klettersteig up Eggstöcke, the Glärnish Massif, Clariden and Ortstock. 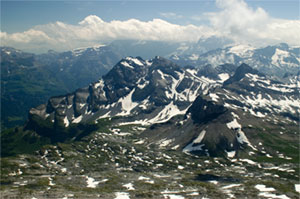 Once in a while I get the feeling that mountaineering is for those who have realized the presence of their mortality, but not yet seen the wisdom in standing far away from the divide to this life, for one who needs some measure of sustenance to keep their fool unevolved spirits in line. 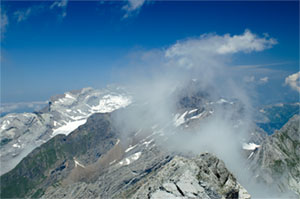 For the descent we traversed along the east ridge and then down the slope.  If you go too far you might notice the 1000 m drop down the east face, we didn’t stray too far and then boot-skied down the glacier. 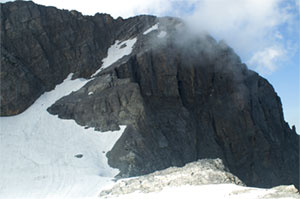 The glacier was covered with small pockets of dust and dirt deposits.  They blow over from the Sahara and form these small depressions in the snow layer.  The dust absorbs more energy from the sun and then helps melt the glacier.  It’s like pricking someone a million times with a thin needle and after enough time all of their blood is gone. 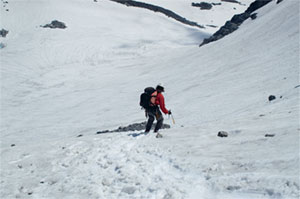 If I return in ten years to climb Bös Fulen again, the likelihood that it will be climbable in the same condition is as absurd as buying a freezer in Alaska during December.  Bös Fulen is a fantastic climb for those who wish to see first hand the slow death of the last great European glaciers.

On the way back to Braunwald we happened upon a mountain rescue.  Nothing serious, looked like someone sprained their ankle and needed to be flown out.  Still, watching the rescue helicopter do a nose-dive landing was cool as all hell. 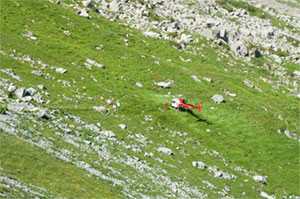 Some could write that mountaineering is a latent fool’s Provence.  Who taught the Swiss to climb?  Who conquered Everest and who starts the wars in the world?  Is it done by those with too much time and with nothing with which to lend fulfillment to their souls and have nothing to fill their days?  Is it like the writer who does not possess the courage to actually do something in this life, and takes to writing in an effort to provide an outlet for their ambitions?  Some might say so, but others might counter that mountaineering is also just a nice way to pass a lazy Sunday and take in the natural beauty which the world bestows upon those who seek the high-country.

All depressive attempts at writing aside, Bös Fulen is an awesome climb, and if you are so inclined I highly recommend it.