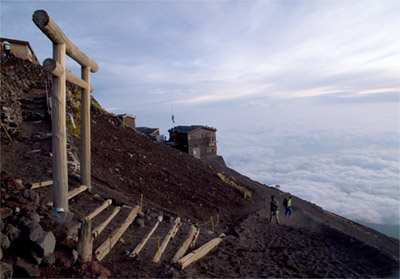 Mt. Fuji, Fuji-san is possibly the easiest and most awestruck climbs I’ve ever done.  The term "climb" is a stretch when describing Fuji-san.  A winter ascent up the iced face might warrant crampons and axes, but a summer/fall experience falls into the hiking category.  The pathway is wide and primarily maintained with heavy machinery, and during the official climbing season, you can buy food and drinks along the way.  I climbed Fuji-san the third weekend of September, just after the close of the official climbing window of July 1 to August 27.  I’d been in Tokyo for about two weeks and my body and soul were screaming from some escape from the manic metros and crowded Shibuya streets.

Mountaineering has historically had a certain man vs. nature connotation.  Climbing magazines like Rock and Ice or Climbing sometimes use the terms assault to describe a person ascending to a mountain summit.  Popular culture uses terms such as conquer when to romanticize the act when a climbing team attains the summit of Everest.  But to say that one has attacked or conquered a large body of earth such as Fuji-san by the simple act of standing on the summit is like saying that the mosquito which buzzes near your sweaty head has made you it’s bitch.  Even the Swiss Alps with their cable ways and hotels and huts have not been conquered by mankind.

Despite the explicit traces of humankind and the rampant tourism and gimmicks associated with an ascent of Fuji-san, all the reverence and sacredness of the highest mountain on Japan, forged in the ring of fire, and risen from the sea like a God of old…none of these things are diminished by the fact that you can buy Fuji-Inspired custard snacks.  The gimmicks don’t make the mountain anything less than it is, one of the beautiful places on Earth. 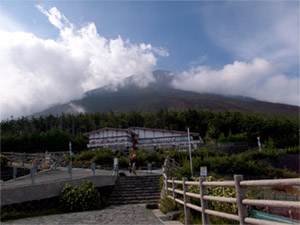 I left Tokyo early in the morning.  Normally one can catch a bus from Shinjuku, but I waited too long to reserve a seat and had to find my way there by train.  I pick up a rice ball and yummy looking lemon drink.  It had a funky taste, something in between sour and fire.  After downing half the can I looked and noticed that the funky lemon can of liquid was 7% alcohol. 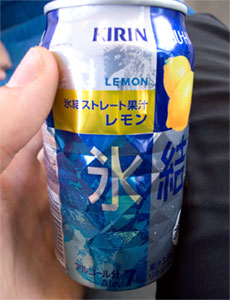 You can start the hike near sea-level, but I, like nearly everyone else started from Kawaguchiko-guchi Go-gome (Kawaguchiko Fifth Station).  It’s a bus stop and tourist trap, and signifies the start of the trailhead up to the summit.  The 5th is like any other tourist pit between the Mystery Spot in Northern Michigan or the Edelweiss-inspired shops in Grindelwald selling Swiss chocolate and cheese and kitsch.  You can get a can of fresh Fuji-san air at the 5th station, just like you can buy a sealed can of cosmic mystery in Sedona Arizona. 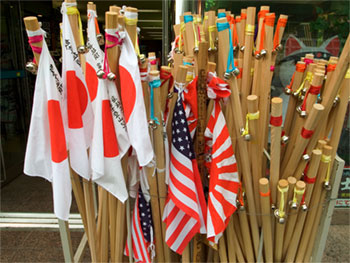 The most popular product is the walking stick.  During the summer you take the stick with you and get it stamped at each station.  I opted not to pick one up, partially because it would be hard taking back to Zurich, also because I was tired of spending Yen, but primarily because I would have entered into a Samurai fighting fantasy and ended up hitting someone by accident. 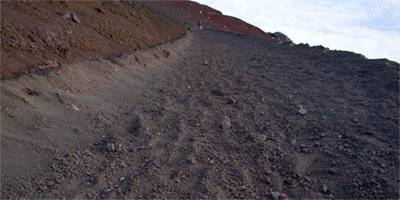 The real draw of Fuji-San is that everyone who can reasonably walk can make it to the top.  If you’re not in prime altitude condition, you can bring along an oxygen canister (available at the 5th station).  I highly recommend visiting Fuji in the early fall, there are fewer transportation possibilities, but there are far fewer people and the shops along the trail to the peak are closed. 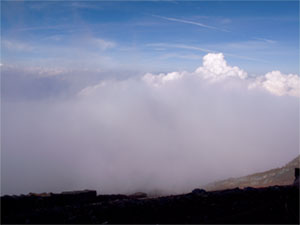 The hike up Fuji-san is uneventful at first.  You begin to rise from the forested slopes and move over some rock, passing huts here and there.  You wonder why you’re ascending and wasting time on this man-conjured joke until the moment you pass through the cloud curtain and see the world falling away below you.  At this point the Zen begins to set in, and you are propelled upwards with a deep sense of wonder, each step a prayer to the deity whom you are set to meet on the summit. 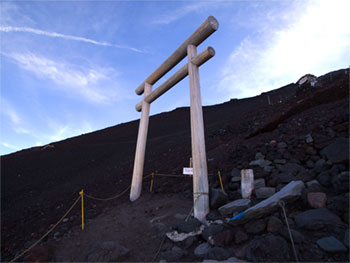 There are a number of station up to the summit, I have no idea when I passed which ones, I really didn’t care.  All I needed to mark my ascent was the continued view of my vantage point getting ever closer to the sky. 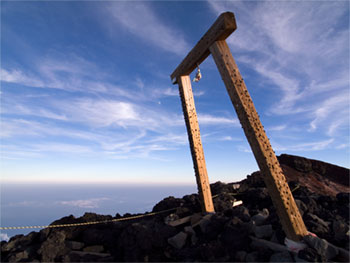 In the Ying of the Yang, there is no sunrise without a sunset.  The many visitors will do a night hike and arrive at the summit for the sunrise, and the mountain is a bustling highway at 5:50am.  But at 5:50pm there are only a few souls, those who haven’t found a hut for the night or already descended.  I can’t recommend the sunset enough.  The popular gimmick is the sunrise, but in my experience it in no way matches the calm magic of the sun falling behind the summits.  The clouds gather in full at the slopes and form the perfect curtain for the shadow of the mighty one to be projected upon. 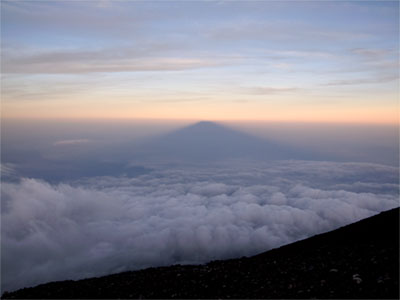 I thought about descending after the sunset and finding one of the huts to stay at for the night.  The cost for one of these runs around 60-80,000 Yen, and for some reason I just didn’t feel like putting myself back into the confines of walls and windows.

The cold was creeping over the ridges and rocks like it always does in an alpine environment after the sun leaves.  We get used to the comforts and confines and forget how vulnerable we are in the world.  I alternated between sitting and trying to sleep for a few minutes near rocks and walking around the volcano craters to move and stay warm.  This also allowed me to see the sky as I never had before.  The moon rose and set and the sky was filled with stars and at other times guarded by clouds.  It was quiet and cold and I’ll never forget the wonderful sleep depravation on the summit ridges and volcano rims of Fuji-san. 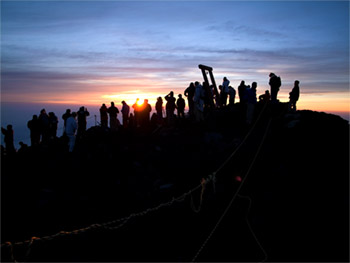 I was shivering at 4am when the first night hikers crested the over the last gate and began looking for the best place from which to see the rising sun.  You can see the sunrise from everywhere, but I opted for the more popular location, along with most everyone else.  The view is filled with cigarette smoke and the light of cell phones screens burns into the eyes as you wait for the sun.  The sunrise starts very slowly.  The sky lightens, and slivers of red start burning themselves into the atmosphere.  Eventually the red eye looks out across Japan and rises up above the clouds which have come to gather around the lower slopes. 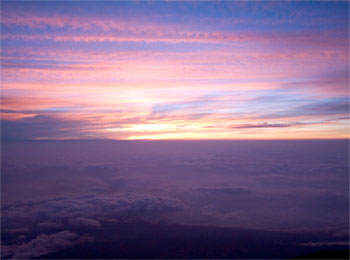 The trip up and down Fuji-san was a wonderful experience.  It was a trip in the most spiritual sense, the way from Tokyo, finding the train, getting to the 5th station, watching the sun set and the stars revealed, the moon set and the sun rise and the eventual return to Shinjuku. 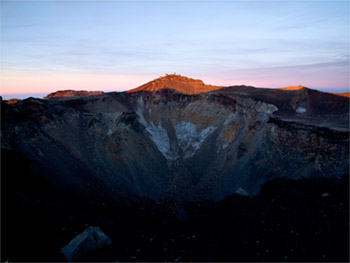 For the inexperience mountaineer Fuji-san is a colossal trek, an adventure of one’s lifetime.  For the lazy sometimes seasoned mountaineer such as your humble narrator, Fuji can be done as a day trip if desired.  One just needs to make sure of the transpiration issues.  Camping is officially prohibited, but like in the Swiss Alps, if you do and no one else is around, there’s no one to tell you to stop.  A number of travelers set up tents on the summit during the night, although I think this is only in the off-climbing season.  Either way, I highly recommend it for those in Tokyo seeking an escape from the manic rhythms of the city.  It is a majestic climb, no matter your skill level or previous mountain experiences.

Specifics on the climbing routes up Fuji-san can be found at the SummitPost page.  Photos and images from this trip were produced with the awesome Ricoh GRD digital camera. 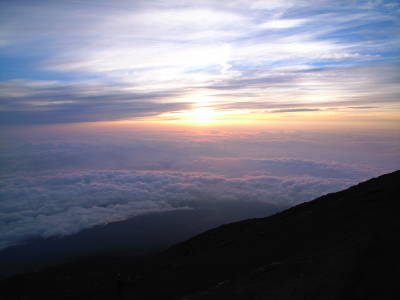