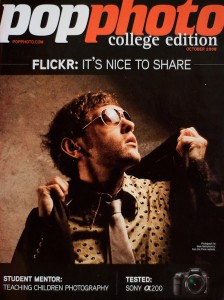 If you spend too much time reading about Web 2.0, it’s easy to get confused with the transmission of creative goods and hopeful returns in terms of money in the internet economy. If you read Wikinomics and practice your life in a Web 2.0 way, then nearly anything you produce should be given away for free. If I produce a photo for An American Peyote Scribble article and post it to Flickr, then I’m part of the philosophical web photography industry where information exchange is the medium (as opposed to hard goods). An internet publisher writes an article, posts a photo, and thereby produces a commodity (say a digital image or story) which is consumed by a consumer (random person on the web – you, the person reading this blog article).

Via Flickr I got an email from the editor of the PopPhoto College Edition magazine about using one of my images in an upcomming issue. My first instict was to think about publication rights and compensation. At this point, there are two basic reactions flowing through your brain: one is the joy that someone likes what you did, the second is the question of monetary compensation for a creative work. When you sell or license a creative work, I’m of the impression that you’re selling or licesnsing the actual medium (digital) and as well as the concept contained within that medium. The reason for compensation is generally obvious, a magazine makes money from subscribers and advertisers (really mainly from advertisers) and therefore photographers should be paid for their work when a magazine editor calls and requests usage of a particular photo.

The image in question is a self-portrait I shot on a weekend afternoon to experiment with my new full-length reflector. I could have demanded money, but that’s not what the image was produced for. It was produced to be displayed on Flickr and my blog, and to not to be used with out consent from myself. Does allowing use of my image without monetary discourse degrade the overall economic potential of the entire photography market simply because it is being published in a freely distributed printed magazine as opposed to say, the Strobist website? Photos from Flickr are used everyday on websites that bring in advertising revenue for the site publisher, and generally no money is set aside for the creator of the image.

If your photo is posted to the Flickr Strobist Group, and used in one of the posts on the Strobist website, you’re also allowing publication to a money-generating entitiy without prior (or future) finanical compensation. The same goes for photos posted to PSDTUTS and a number of other Flickr groups. But this isn’t considered to be a bain on the entire creative industry (and shouldn’t be). You post your photo to a popular Flick-website-integrated entity and get exposure to a wide audience, the site gets content for the readers and the advertisers pay to keep the site going, since they get exposure to potential customers (the readers of that particular site). To close the economic loop, the groups which I post my images to are generally linked to my digital imaging education. I’ve learned a great deal from both the Strobist and PSDTUTS websites, so I feel like it’s a fair trade if they use my images on their site, despite the fact that I’ll receive no monetray compensation from advertisers. In the end, services and digital goods have changed brains, been absorbed, and I receive a free education as they receive rights to display my images on their sites.

For the past year I’ve mainly been shooting myself, this gets boring occasionally, and I’ve since expanded to organizing portrait parties and TFCD model shoots. Why? Because it’s a challenge. Everyone is cool and beautiful in their own way, and it’s far more challenging for a photographer to make themselves look interesting than simply photographing a stylized movie star. Some say that nothing which is free has any real value. And something which is useless can never be truly beautiful. Some practice a free photography based (non?)business model and others push a traditional photography business model. Does giving PopPhoto permission to publish my Flickr photo devalue the cumulative impact of the creative industries? Did I grant the publishing rights for my Flickr photo just so I could write this article? Perhaps, but that’s the beauty of being a Creator, you have the ability to control (to an extent) the use of your digital productions.

Heavy thoughts on any day of the week.

One thought on “Stroking the Photography Ego: Published by PopPhoto For Free”