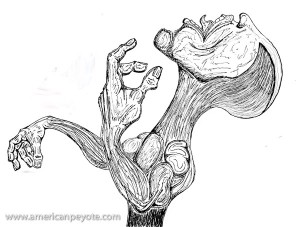 I’m a drawer, I doodle, I always have, and I intend to never stop.  I’ve drawn in class as long as I can remember.  On my progress reports my teachers would often write that I was a good student, but my only problem was that I drew during class.

Now, looking back after 31 years, the majority of which have been spend in class learning everything from reading English to writing Japanese, thinking about Algebra, Calulus, intermediate dynamics, biomaterials, engineering, chemistry, physics, everything inbetween, all culminating in a Doctor of Science title from ETH Zurich, I can tell you with aboslute certainty that doodling, and continuing to draw in class was one of the best decisions I’ve made in life.

Drawing in Science and Engineering classes forms the perfect Arience – mix of art and science. I talked about this notion of Arience at the 2009 Swiss StartUp conference (Idea Generation and Development). When half of your brain is bleeding – trying to understand the diffusion equation or the basics of colloids science, it just makes sense to exercise the creative centers and draw something.  My biggest critique of my engineering classes at Michigan State University (MSU) is that very few of the professors took time to understand this concept.  Teachers of all levels should take the time to understand their students, and to understand how their students learn.  In the end it makes you a better teacher.  Trying to apply a rigid I-know-it-all teaching philosophy to every student is harmful and highly counter-productive to learning.  And if you’re not interested in teaching, well, don’t become a Professor – just go to the private research sector. 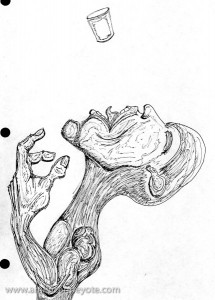 By far the best drawing I produced at MSU was started during a Chemcical Engineering course on Colloids.  I wanted to learn about colloids science to better understand the application of 3D printing and rapid prototyping technology to the manufacture of 3D hydroxyapatite bone scaffolds.  The class started out fine but the lecture consisted of Dr. Ofoli runing through a black and white PowerPoint presentation for about an hour and a half during the evening.  Although the slides were prepared before class, he wouldn’t let us download them for class to takes notes with, “because then students wouldn’t come to class.”  So, basically I didn’t learn anything during class, all I was doing was trying to copy everything from the presentation before he flipped to a new slide.  The woman who sat behind me would draw Manga all night, and one night my brain had had enough and drew a giant screaming head inspired by Pink Floyd: The Wall.

My frustration culminated one night when my brain was about to explode and I drew a giant screaming head while listening to notions about colloids and chemical interactions.  I dropped the class soon after the first exam, not because I didn’t find the topics interesting, but because the learning technique was so completely opposite to my natual way of learning, it had simply become a huge waste of time to attend the lecture, and since I had the book, I could just learn whatever I needed. 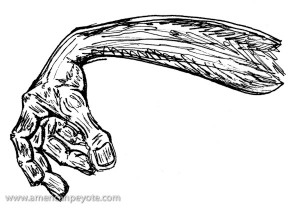 To finish the screaming head sketch I scanned it and started some basic work in Photoshop.  Using my Wacom tablet I erased part of the head and then added an arm – drawn later on a separate night. I didn’t like the original shape of the head so I re-drew the head with my Wacom and then made the head more alien-like, with oriented pen strokes.  In the end, after writing Revolt from the Singles Table, I realized it was the perfect graphic to place opposite Chapter IV.

“Only a determined removal of the viels of society sets the soul free…a beast approaches.”

Sometimes art influences science, sometimes science inspires art.  Sometimes boredom sparks a new idea, sometimes you use analogies to develop new concpets in different fields.  Whatever the outcome, find out what works for you and exploit it.