The days after a Web Monday Zurich (01.12.2009) is always hard on my head – still exploding from the tech-inspiration from the night before. On nights like this I need to find a dim place with mellow music and down a beer, sometimes with a chocolate brownie to calm my mind (this often happens at Alltag in Winterthur). The 11th Web Monday Zurich took place in the Zurich Google offices, that alone was enough of a reason to attend, the technology insight was just a bonus. There were three topics; Panoramio, UBS Web 2.0, and Mathias Vogel. Then I got a chance to tour through the Google offices.

The Panoramio presentation wasn’t so much about the software, but more of a how-I-woke-up-and-found-myself-successful talk by Joaquin Cuenca Abela. Joaquin sounds like the type of startup personality everyone imagines it should be like. A basic idea, applied to a certain technology, you keep pushing your ideas, and for some reason you get a call when you’re in the mountains to hear that your one server has crashed and your idea is becoming a success. Joaquin tried a few different ideas before thinking it would be a good idea to allow people to post pictures on Google Earth (the purpose of Panoramio). Basically they did that, eventually Google got interested in it and added it as an option on Google Earth. Then the server crashed and they knew they had arrived. It’s the feel-good type of story that makes a person want to quit their job and sit around an apartment drinking beer and programming. However, the real essence of the talk was that one should just keep trying with their ideas, many successful web startups are by people who are not necessarily super smart or unobtainably talented. Just do what feels right, respect you decisions and try different things to find out what works.

Next up Andreas Hoffmann gave a presentation on a challenge/contest from UBS. Basically, UBS wants to know how to use Web 2.0 in the banking business. All they want is 4-5 PowerPoint slides by Dec. 24th explaining your concept (details at the Web Monday Zurich project on Amzaee). The top three winners get 5000 CHF each. Sounds pretty sweet, pretty basic, straight-forward, everything you always expected in an idea contest. Since I’m an idea man I’m planning to brainstorm some ideas and send it in. After all, I’m a UBS banking customer, and if I can tell them how I want Web 2.0 in my banking life and they’re going to take me seriously, well, that’s worth a few nights at the coffee shop combined with some scribbles on a piece of paper on the way back from a night out in Zurich.

Last up Mathias Vogel talked about the Fachhochschule Nordwestschweiz (FHNW). The FHNW school is interested in applied research, which means creating prototype technologies, serving industry partners, as opposed to basic science and writing publications (like at ETH Zurich). The program is currently after woman and industrial partners at the moment, with one goal being making computer science more attractive to women. I like this idea, and I can understand the motivations but generally dislike programs which separate one group of people from another at this level. I sort of felt excluded in many ways from the research communities in the United States because such a great push was made in universities and companies to recruit everyone who isn’t a white male (and that would be me). I decided to do research work at ETH Zurich largely because they seemed to be interested in results and ethics more than looks or gender. I think the best way to get more woman into the tech fields is to do more outreach at the lower levels and preschools and teach children at an early age not to exclude colleagues because of their gender or skin color. Pushing for women at the professional level, after they’ve already gone through a male-biased system and are already taking a research carrier direction (already succeeded despite the roadblocks) seems like a good start, but I think that giving support to tech-minded girls so they realize they could become startup-creating-women could have a greater influence (hmmm, sounds like a cool Amazee project idea). But now I’m interjecting random commentary where it might not belong (or does it?). 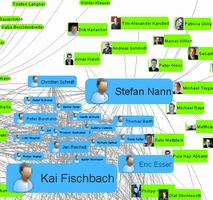 As part of the FHNW program two projects were also presented. Amazee is included in one of their partner projects, one goal being the creation of a sort of Karma Index into the Amazee system, which will include a recommendation engine so that new users are quickly connected with other users with similar interests when they join. I find this to be fantastic, because the first thing you wonder about when joining an online organization like Amazee (or Stylished, or Talenthouse, or Flickr) is how to find the people you want to work with. My mind had become a tad befuddled by this point from the free beer, but it was able to coherently listen to the presentation of the Galaxyadvisors.com website. It’s basically a connection engine, trolling through networks picking out connections between different people, creating connections between them, and then displaying this as a giant web. I’m more or less smart enough to appreciate the full value of it, as were most people in the room. I’m going to keep tabs on Galaxyadvisors, as many great things could come from it.

After the talks I walked around the room enjoying two quick glasses of wine talking with cool people, and then took a tour of the Google offices half buzzed on vino. The experience was…fantastic. You don’t need to be half buzzed to enjoy the Google offices, but it does enhance the experience. Just walking around you feel drunk, wondering if it’s possible, or if you’re simply hallucinating, can it be possible for offices be this “cool?” No, this is madness, surely I drank a bottle of bottle of Jack at my apartment and am simply losing all functions of my mind, and as a last gasp before dying my brain has created this fantasy land for me to enjoy before I cease to exist. But this actually happened, and I have pictures to prove it, as well as a video of my shoes sliding down a pole instead of taking the stairs.