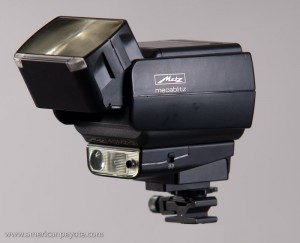 When I started out with learning about lighting via the Strobist website, I was into the idea of picking up a couple of cheap Nikon SB24, 26, or 28 flashes on eBay. I soon realized however that this was a fool’s game as the Nikon SB line had been strobisized by David Hobby, and the used prices were over $100 for what should have been a cheap strobe to use with my cheap Chinese radio triggers. Then I asked myself a basic question, “Why buy a Nikon SB24/26/28 anyways?” What about a Metz?

The Nikon SB flashes are nice since they’re powerful and certain models can dial down their power to 1/125 or 1/256. This means you have a lot of flexibility with fine-tuning the exposure while shooting. By comparison, the Sunpak 383 and 120J (two of my favorites) only dial down to 1/16 and my Sony FL58 only does 1/32 in manual mode. After some searching I realized that Nikon wasn’t the only option for a quality flashes with a large power range and looked to Metz. Metz is a professional flash producer out of Germany. They’ve been making flashes since before I was born and produce a quality product that rivals the offerings of the camera makers. Metz flashes are generally designed to be workhorses for pro users who need to flash away all day at a wedding or some other event. This means they’re robust and designed to last a long time. Some even have user replaceable flash tubes. I reviewed the Metz offerings on the used market from the viewpoint of price versus performance, and eventually settled on the 40 MZ-3i. 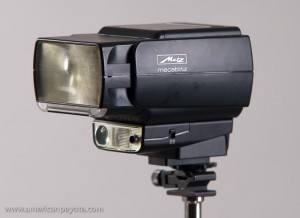 The Metz MECABLITZ 40 MZ-3i is a sweet flash (although now discontinued), and also offers a unique body design for off-camera flash work. Most shoe-mount camera flashes all look the same, the head points straight up in the normal position, and you have to angle it 90 degrees to shoot into an umbrella. The 40 MZ is designed exactly opposite to the norm. In the normal state it’s already pointing along the axis of the camera lens, which makes it perfect for mounting on a light stand and shooting into a softbox or umbrella (it’s more centered along the axis of the umbrella than a traditional flash). Additionally, the head tilts up, slightly down, plus it rotates around. So, basically with the 40 MZ you have a compact flash which is excellently designed for off-camera use with a large power range.

The MZ40 has all the features you want for off-camera (call it Strobist is you like) use. It has decent power, a guide number of 40 (ISO 100, 50mm), the flash power dials down to 1/256, you have a modeling light, stroboscopic function, zoom head (20mm to 105mm), external battery packs, etc. Additionally there’s an integrated wide angle diffuser, the the head pivots vertically between minus 13° to plus 90°, and can rotate 270°. The 40 MZ was produced in three main versions (I, II, III) plus an i designation. The 1 and 3 versions are basically the same except for some minor added functions. For off-camera manual use there’s really no difference. 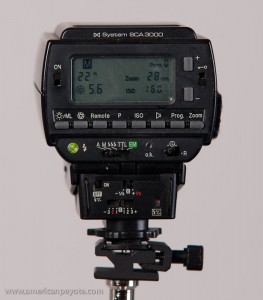 I picked up two 40 MZ-3i’s to shoot with on the used market (one from KEH and one from Adorama). There’s a battery pack you can buy or just shoot with 4 AA batteries. I recommend avoiding the battery packs since they’re old, and if you can get one it probably is run down and will hold fewer flashes than using the standard 4 AA’s. On the back of the flash you can control all the flash functions, which for me means leaving it on manual and adjusting the power level or zoom. If you have a compatible camera and SCA module you can use the TTL functions, but since the 40 MZ is rather old (from the days when film ruled), it’s possible that with your new digital camera the flash won’t work on anything but automatic or manual (no TTL) mode. In automatic mode the flash determines the proper exposure after you set the aperture and shutter speed on the control screen, in csae you want to use it on camera. You can check the function compatibility on the Metz website (a chart shows what functions work with different cameras).

Metz builds two types of flashes, some specifically for certain camera makes like Canon, Nikon, Sony, etc. The other type they produce is adaptable, with separate SCA modules so a flash body can be used with just about any camera body you like (Canon, Nikon, Mamiya, Leica, etc.). The 40 MZ is this type, using SCA modules. This doesn’t really mean anything unless you want to use it on your camera. I have one 40 MZ with a standard shoe (one single pin) and I have one with the module for a Leica camera. Both types are easily triggered using a hotshoe adapter plugged into my Elinchrom Skyports or any other radio trigger. 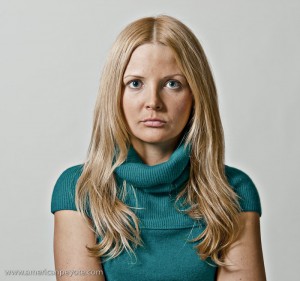 There’s little to say about shooting with it, because the 40 MZ is great to shoot with. It’s a workhorse flash with lots of power and a large power range. It’s compact and versatile for off- camera shooting.  The combination of compactness and functionality makes it ideal for location shooting. I also mix the MZ40 with my studio strobes. For example, I might have an Elincrhom BxRi in a CreativeLight softbox paired with a Metz 40 in a Kacey Dish. The MZ40 acts as the control light to fine-tune shadow details while the BxRi lights most of the scene. This is what I did when I shot Oksana, the ability of the Metz to dial-down to a low power made the lighting work, whereas a more powerful flash like a Sunpak 383 would have washed out the fine details of Oksana.

On the other hand, the MZ 40 packs a lot of power, and is ideal when needing to balance the power of the sun on small shoots. This is what I did when shooting flowers on the terrace of my old apartment. The sky was blue, the sun was high, I was bored, and the tulips were in full bloom. So I setup the MZ40 dialed up to maximum power and used it with a weak-powered Contax TLA280 to create some awesome tulip pictures. When I’m traveling I easily drop a few MZ40’s into my Pelican 1510 case like Tetris blocks and pull them out as needed.

If you’re looking for a unique flash for off-camera use I recommend checking out the Metz 40 MZ series. On the used market the 40 MZ-3i generally goes for about the same amount (or less) as a Nikon SB, but since nobody except for you, me, and a couple other folks on the internet know about it, you’re not as likely to get into a bidding war on eBay. I bought the 3i version because it’s newer, but they cost more and if you’re looking for a bargain search for the 1i model.

The MZ 40 was one of my first flashes, and I liked it so much I bought a second one. Large power range, decent price on the used market, and unique head design, perfect for off-camera use. If you want more functions than a Vivitar 285 or Sunpak 383 and want to avoid the Nikon SB-line, check out the Metz 40 MZ.