The grand video poetry creative invite experiment is going to the next level. I am pleased to announce that Bobby Cuevas is the winner. There were 15 entries from artists in different corners of the world submitting to the contest, and I had the opportunity to pick one to work with. Thank to everyone who submitted to the contest, it was truly an honor to see people creating music for the project, and using Talenthouse to connect us was excellent. The winner of the contest has the opportunity to work together with me on my next series of video poetry short films. I’ve never been in the position of choosing a contest winner, and in the end the choice was made on context.

Judging creative work of others is a strange business, and in the end it comes down to tastes and context. There’s really no other honest way to do it. Something can be technically great but not be what you’re looking for. The context is the head of the person choosing, and isn’t something that can be predicted or necessarily designed for. This was one of the main lessons from the Professional Artists seminar I attended at the F&F Kunst schule in Zurich this summer. Art is bought in the gallery scene based on context. Is it new, does it fit with the gallery, is it maketable, does it create a reaction – and how does it do that in relaitonship to all the other art in the Zurich art world? Art doesn’t have value without context, and as the context changes, so does the value of the art.

For the decision process, I mainly looked to see what the music would create in my head, and based off of how ambivalent or twisted those images were, I decided to go with that artist. I figured, the music which creates the strongest reaction in me is probably the best one to go with. This was a measure of how the work of the artists would match my work. There were a number of entries which were excellent, and I could imagine creating a movie with them, but just didn’t fit into the context of the project I have in my head. As an artist, the most important thing is to connect with people who like your work, that is the context in which you will be successful, and sometimes it just needs to be one or two people.

Bobby did a production called Coming Together, it starts with a cut from the song Come Together, and then drops into a drumming rhythm, it sort of bores into my head and remixing into a fluid menagerie that just mixes well with images of a Bratz doll 50 feet tall, walking through Detroit with a .50 Cal sniper rifle. It was the later part of the track that started pushing my neurons around. I could see a sort of blackness with interspiced flashes and a person walking down the street, the camera in my head did a pan and then a steadycam momevent around a guy’s face, then the scene was reversed in editing and then there was a robot fish crawling out of the ocean and started to walk.

So, I look forward to working with Bobby on a video poetry short film series. Thank you to Talenthouse, adambrioza, ybudman, lollyjean and everyone who submitted to the video poetry creative invite. 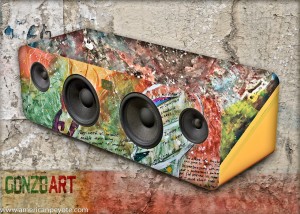 I was looking through my Facebook and saw that Jennifer Chalbaud, a designer I had met through Talenthouse had submitted to the Kanto AV speaker Creative Invite, and that it was ending in 6 hours. I had a vision for a second, and wondered what it would be like to combine Lazy Art IV and Gonzo Art in a speaker design. It seemed fitting, to take the art created from 1 Day of Art Copenhagen, and see how it would work when applied to product design. I got back to my place around 5:30pm and had until 7pm to submit my design. After screwing around with SketchUp and a dxf file in Adobe Illustrator for 30 minutes I decided to go back to what I know and started making layers and masking in Photoshop. The result might scare some people, but I would buy one.

I started off with a white Kanto speaker box from Talenthouse…it’s a nice simplistic design, speakers on the front, clean lines, contoured sides and curves, something very clean and sexy. At this point, one could go with a minimalistic design to complement the form of the product, or go in the opposite direction and create something that dominates, both in color and form. I decided on impulse to go with the latter approach, and in my mind grafted two paintings onto the Kanto… 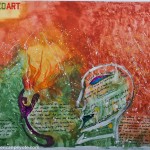 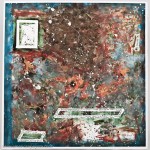 My favorite painting from 1 Day of Art went on the front, using the lower section of the patinting, which includes passages of writing, and this flows upwards with the Basquiat-Alien inspired head. I wanted somthing else for the top though, and decided to go with Lazy Art IV, which is sort of a universe view, with lots of color combinations running into one another. The paintings are sort of inspired from music, visions in the head, so it made sense to combine them with a speaker design. The final design is on Talenthouse at…Design for limited edition Kanto speakers