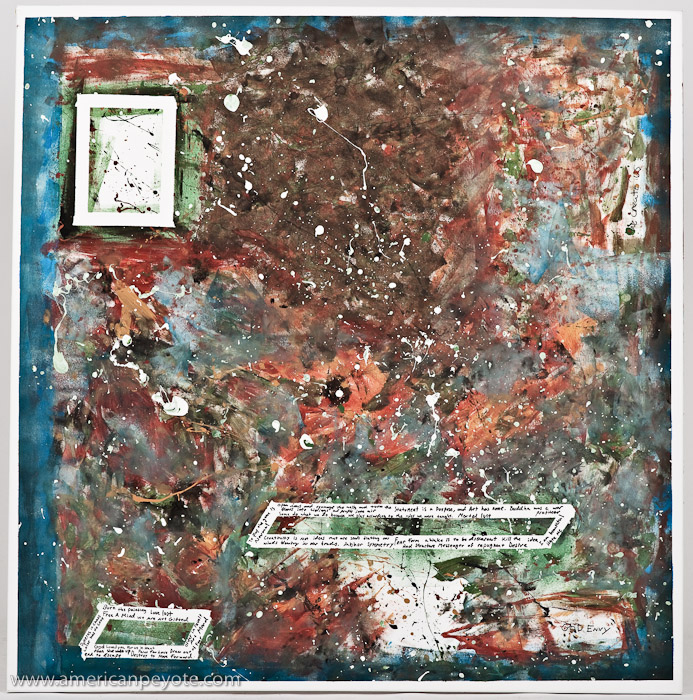 Lazy Art IV (my last painting) is a combination abstract splatter and writing I did one fine Sunday this summer instead of heading to Art Basel. I like the chaos of colors mixed with the consusion of words, so I tapped off a few areas and added text I had worked up while brainstorming about the ArtMord concept. KusntDeath is sort of a mix of themes from Fight Club and Jean-Michel Basquiat with a little Hunter S. Thompson and Beethoven thrown into the mix. It’s a 1x1m canvas and done on the cheap with latex paints and sponge brushes and a roller. Don’t ask me technical questions like what texture I used or the philosophy behind my brush strokes, because I’m the last person to anything about such topics. I paint because something is unhinged inside my head and some comfort comes from mixing random colors together. I would like to be one of those methodic painters who looks for the perfect color, mixes their own paints and has a vision in mind before putting brush to canvas, but that’s not what I’m into at the moment. My painting style is born of sketching in math class and manipulating colors and tones in Photoshop to mimic the feeling of graffiti I see on the streets of Berlin, Zurich, and Detroit. 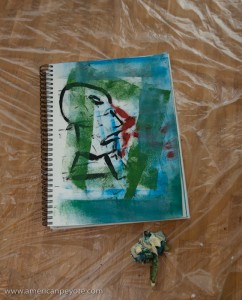 At one time when I started experimenting with painting I had the idea to sketch out and color the painting concepts with manga markers. This failed horribly because without the large canvas in front of me I just don’t have the drive to create that sort of color and structure combinations that sort of explode from my brain when actually painting. Still, it’s nice to experiment, so this time I had a large sketch/art book with me and I used it to try out the roller and paint splatters alongside painting the actual canvas. This worked out extremely well, because I had the freedom to quickly try some color combinations and then jump back to the canvas and go crazy. Like always, I was painting in the “winter garden” room of my apartment. Plastic lined the floor and walls and I had near-total freedom to throw paint around without the worry of needing to repaint my white walls later on. I guess I could also easily dispose of a body with a turkey cutter a-la that scene in Snatch like a London gangster. But I’m a calm and non-violent person, so I’ll stick to throwing paint. Blood splatters don’t interest me. 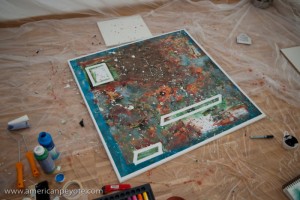 I’d like to be clear on this point, I love painting large canvases with random colors for the experience. I liken it to multi-pitch sport climbing routes, writing, or to mountaineering. I like starting with a blank page, and being scared that it will look worse when I’m finished. It’s like looking up a long rock ridge and your mind telling you to turn back. It urges you to return to the false safety of organized society and sends fear waves up your spine as you jump over crevasse openings. Ignore the fear, that premonition of failure and demise. It’s just your natural response to doing something dangerous, either in the world or in your mind. I don’t think of conquering fear, I like to walk along side it like old friends. We trade words back and forth before I jump off the platform of a rope park or let my feet dance over the edge of rock ridges. 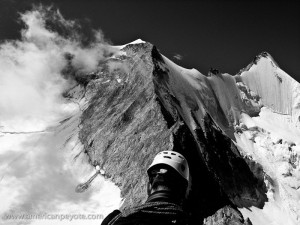 I like to stand above a blank canvas and ponder the next step. The mind tells me to not even start, exit the room and go back to my computer and watch something on MTV. I say, “fuck you, I’ll take my chances.” Fear is a suggestion, something built into the DNA to protect foolish people from hurting themselves physically or emotionally. Don’t take it too seriously. The fear crops up in many places and sometimes unannounced. It might be there when you ask a girl out, do a presentation, climb a new route, jump out of a plane, apply for a new job or walk into a room full of people you’ve never met before. I paint because of the desire for a little adrenaline rush on a rainy Sunday afternoon, or just to see what come from it. Why did you take the picture? Becasue I wanted to see what it would look like.