Engineering for the People – Radio Triggers

20 Jan ’08Gearradio, radiopopper, strobist, strobit, trigger
One of the great possibilities the current digital age is the revolution in photography and off-camera flash, an often over-looked aspect is the development of radio triggers to activate off-camera flashes. There are currently two known projects from non-corporate entities developing radio triggers for off-camera flashes, RadioPopper, and the open source Strobit Trigger project. 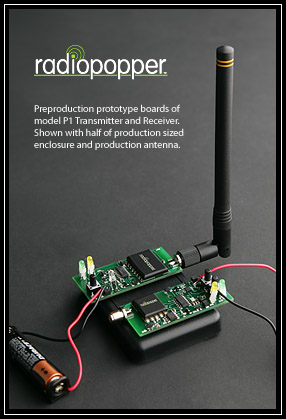 The RadioPopper P1 and P8 are devices that goes on standard Canon and Nikon flashes and turns their IR light-based triggered TTL functions into radio-based ones.  By "goes on" we mean as in "stick on" no permanent modifications to the flashes are needed.  In some Geek circles this is the equivalent of combining Voodoo and Witchcraft into one compact religion to dominate the position and intensity of the Sun.

If the RadioPopper works, it means that the high technology tied into crazy expensive flashes like the Nikon SB-800 and Canon 540 can be combined with the awesome convenience and reliability of the most popular flash trigger available, the Pocket Wizard.  The RadioPopper is supposed to be an add-on for Canon and Nikon flashes, but it’s impossible to discuss any radio triggering device without bringing up the industry standard Pocket Wizard.

As a photographer who generally uses only manually enabled flashes like the Fuji GA, Contax TLA-280 and Metz 40, I’m more excited about the third trigger device from Radio Popper, a basic radio trigger – higher quality, greater range, and more reliable than those fantastic Chinese models from Gadget Infinity, but at an only slightly higher price.  Of course, part of the reason I use manual flashes is that I use a Minolta camera, which has only recently been saved by Sony.  Rumor on the RadioPopper blog is that Pentax, Olympus and Sony flashes will be included in the P1 and P8 compatibility list.

Getting down to brass tacs, the Radiopopper is a slick example of engineering being taken into the hands of the people – filling the void that big business has failed to capitalize on.  A fantastic idea coupled with innovative drive and the motivation to serve a niche market with a product that’s in demand and staying in tune with your potential future customers from design to product realization.  Early on the RadioPopper developers were seeking feedback from Strobist readers on Flickr.  It’s a pretty kick-ass example of how to go from concept to product without the benefit of a research and development department.  This is basically how Apple started, and in these days of Wars and hard economic times, it’s fantastic to see this dream of Radio TTL coming to the market from a start-up company.

However, even more over looked than the Radio Popper is the Strobit Open Source Trigger project.  The open source trigger was bound to happen eventually – the natural curiosity of photographers coupled with the Do-it-Yourself mentality fueled by David Hobby’s Strobist movement was bound to eventually give birth to a DIY radio trigger project.

The advantage of the open source Strobit project isn’t just the idea of manufacturing a low cost alternative for the off-camera lighting enthusiast, the Strobit platform would be open for add-on mods to the firmware, and by using an expansion bus incorporated into the circuit the Strobit now harbors some fantastic development potential, like firing strobes in different sequences and other custom functions like sound triggering.

The Strobit project is a banner example of the power of open-source.  The camera product world is littered with proprietary cables, lens mounts, and flash accessories where the large camera makers like to control the profits for add-ons to the DSLR market.  The Strobit project is ultimate Engineering for the People, because it means that normal non-electrical engineering folks will be able to build and modify their off-camera strobe triggers to fit their needs, not their needs as projected by the profitability of electronics manufacturers.

Let’s end this madness by noting that 2008 is going to be a banner year for digital photography Geeks of every skill level.  PMA is coming up in a few weeks, and the safe money is on Canon to drop a new body like an upgraded 5D – look for the K20D from Pentax – and the hope of an A900 announcement from Sony.