I’ve been fascinated by photography for sometime.  In particular I like trying to capture moments of movement and darkness that cameras and eyes usually never get.

But sometimes you get bored, don’t want to drag along a camera and look for another way to express some creativity.  Most of my progress reports at Detroit Country Day School focused on similar theme,

So lately I’ve been getting back to my roots.  Those long tentacles that have been developing in school since I could pick up a pencil.  Drawing, the first artistic love of my life.

I used to draw in every class from History to Math, even Graduate level Colloid Science.  For some reason the professor didn’t appreciate this very much.  When I asked him what I could do to improve my understanding of colloids he cited my sleeping in class and attention to sketches as evidence that I was a poor student.  Of course, he was oblivious to the fact that the woman sitting behind me drew more often and far more elaborately during his PowerPoint lectures than I ever did.

In reality I draw in class to keep the visual centers of my mind occupied, and to balance the resources needed to retain information in the long-term memory banks.  As the keen reader might imagine, my teachers have never really understood or cared about this technique.

Back to the recent past, I took in two concerts recently: Kosheen and Juliette Lewis.  My cameras stayed at home while I sketched the events as they occurred – true Gonzo Sketching Journalism.

Kosheen is an electronic-themed singer from the UK.  The music is something like relaxed Jazz feeling a-la techno music experience.  Her show on Wed. April 18th was in the Zurich Volkshaus venue.  It’s close to Helvetia Platz, just a stones throw from Xenix and only a few blocks from the strip joints on Langstrasse, the Red Light District of Zurich.

Volkshaus has a nice theater-like setup.  The lobby entrance includes bouncers and a bar.  Walk through the doors and you’re on the main floor with the stage at the end of the room.  Sometimes you want to dance in-front of the stage, sometimes you just want to relax and enjoy the experience.  We went upstairs to the balcony section where we had free roam of unreserved wood seating.  Hanging from the ceiling was grand chandelier-type lighting. 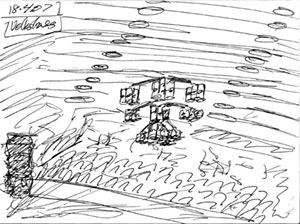 I like having choices in life, Volkshaus is a cool venue because you can be part of the show on the floor or just chill by the roof rafters.  The balcony also gave a nice vantage point for sketching.  On the floor the action would have been moving too fast to draw anything, but in the thin air I could sit back and let the scene materialize on the paper. 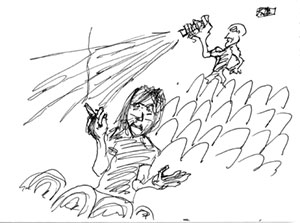 It felt good getting back to my drawing roots.  Unless you’re taking a high-quality camera to the show, your photos will most likely turning out looking black with some detail of the people on-stage.  By sketching the scene you can make things as clear or obscure as you like, add whatever elements are needed and leave out the distracting ones.  Plus, it makes you look at photo subjects in a different way, combining this slow exposure technique with your photographic vision helps develop an eye for the interesting elements of a scene which your pocket digital camera would have probably glossed over. 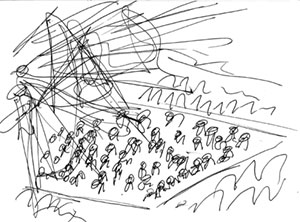