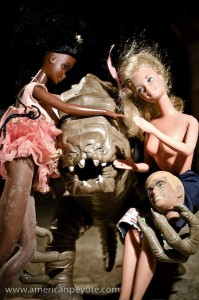 After making preliminary plans to re-write the internet, a few of us from the Amazing Amazee Booster Party headed into the heart of Zurich to find the Digital Shaman at Kanzlei. We paid the cover charge and moved through the place pack with bodies. The DJ was spinning and we made out way to the front of the dance floor.

Culled into the Shaman’s Trance, secure in his embrace the dance waves encircle the mind. This was the final cap to the night, a long set of music and body movement. The mind moving in and out of step with hard reality, and every part of the brain and body gets tuned in to the music. These places are best to leave at the apex, before the DJ starts the chill-out music and the lights come on. But we had no intention of leaving before the music stopped, and danced until the end. At 04:01 “Give Me Love” started playing, and I knew the night was closing. It’s a sad way to end the shadow games and await the morning sun, the DJ had no initiative and played something easy to end on – A downer. I like to dance out of a place, my emotions intimately connected with the rhythms. The lights turned on and we headed outside.

“Das Music spielt in Mein Kopf!” I yelled back at the bastard who had killed the beats. My fists raised in mock protest. Indeed, the music is always drumming in my head. The Doors gets mixed into Beethoven, and I don’t need an iPod. I just listen to some stuff in the morning, and remix the rest of the day in my head. Then I head out to clubs once in a while get fully engulfed by the energy. The night ended and the morning began on a train back to Winterthur around 5am.

This end wasn’t too different to the next Thursday when I headed out to Zurich to celebrate a birthday. We started at PurPur, a restaurant and nightclub near Stadelhofen. That night started out in a similar fashion. The mind confused, I decided to walk confidently into the night, wait for the beast to take on a fantastic form and then embrace the monsters and creatures which you meet along the way. Strangers are friendly faces in the shadows, and nothing is quite so comfortable as when you face the situation with the right eyes and attitude. The problem is that Zurich was dead that Thursday night. This isn’t Berlin where you can easily stay out all night, every night and walk out of a club into the sunshine. We left PurPur at midnight, and the place was nearly as empty as my apartment, just cleaner, fewer clothes on the floor. But if you try hard enough, even on a dead Thursday in Zurich you’ll find what you were looking for.

We stepped into Amber, right across from the Zurich Hauptbanhof. Amber is an over-priced place, but there was no cover-charge and a DJ was spinning – so the costs all balanced out, plus there was no other option without paying to get inside Hive or Kaufleuten. Amber was loosely filled up with bankers and foreigners (like us). The scene was basically a bunch of highly successful business guys standing around a few women that couldn’t be bought, but pretended like a price was listed next them on the bar. To characterize the ambiance in a single scene, one banker chick with a low-cut breast-popping, almost fully unbuttoned shirt was getting eye fucked by five guys at a time. A few other bank managers half-danced near the bar – trying to look hip and trendy. They stopped moving every five seconds to see if they could catch the eyes of one of the few women in the place – to see if anyone was looking at them. It was a sad and irrelevant scene. Irrelevant because we had come for the beats, and headed directly to the dance floor by the DJ.

For this Amber was perfect. Cool music, slightly deserted, little smoke in the air and room to dance. I easily lost myself in the music and started my interpretive dance moves. The floor was comfortably covered in broken glass, and large chunks got embedded in my Doc Martens, which made sliding around the dance stage effortless. There was a small group of Vikings on the floor as well, two tall guys with blonde hair wear white T-shirts and jeans, and one short female in a black skirt. They were the only other people interested in just enjoying the night and being touched by the music. I channeled Jim Morrison and started doing an Eagle Sun Dance. Arms outstretched in the sky, slowly circling the Earth below, you fall into that sacred trance and feel only the music. The body becomes the receptacle for the soul – and as the DJ turns it to a high-frequency sea of waves, which tunes in perfectly to those of the brain and showers down around your being – the mind-body connection becomes totally complete.