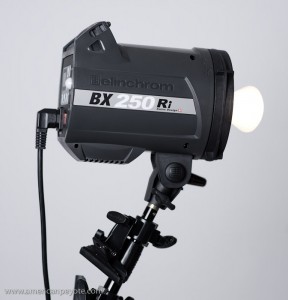 If you’ve been playing around with small flashes and are starting to find them limiting, or just want to blow some more money on photo lighting, then a studio flash might be the answer. I evaluated a lot of different studio flashes in my quest for a pair of larger lights, and eventually settled on the Elinchrom BxRi range when I decided to put together a photo studio in my apartment. The past 5 years have seen an explosion in flash consuming by non-pro hobby and semi-pro photographers. Fueled by the internet and gear lust, many have reasoned and re-reasoned the need for a pair of studio strobes in your heads. But why? Have your small flashes lost their luster? After all, light is light, the photos from small flashes are the same as those from studio strobes.

“Can I do this shoot with small flashes?”

Probably you could, but it would probably be cooler with larger ones. The fact is, when you’re shooting on location or in a studio space the large monolights are nice to have. If you have an AC power outlet you never have to worry about the batteries dying and can enjoy large light output the whole day long. I know what you’re thinking, “more brains, less light” or “enhance the natural ambient” lighting instead of blasting a scene with a lot of light from a studio strobe. This is the philosophy I started with during my Strobist-dominated lighting education. But the truth is, I got into studio strobes simply because I wanted more lighting power and more flexibility and control over the light. The small flashes had become limiting and I found myself lusting for something more. There are many options for proper studio strobes, but I settled on Elinchrom for the nice mix of expandability, dependability, and value. The Elinchrom BxRi series offers an attractive combination of features including, fast flash duration, integrated Skyport with control, mid-price range, good recycle time, and multi-voltage capabilities. More expensive than Alien Bees but cheaper than Profoto the Elinchrom line offers a good price/performance value. 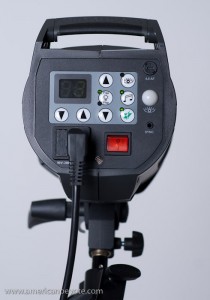 Basically, I bought a pair of BxRi strobes because they offer a nice range of lighting features and remote power control. An Elinchrom Skyport is integrated into the BxRi design, so you can adjust the power level of up to four different light groups from the controller on your camera. Since the devices are integrated into the flashes, you never have to worry about charging their batteries or even turning them on, they’re just there and ready to work when the lights are powered up. Having power control is very nice when you don’t have an assistant to run around and change your lights. Also, if a light is far away or placed high on a boom, it’s a hassle to bring it down just to change the power level on the light.

Since you can buy a universal Skyport to trigger a non-Elinchrom flash (like a Sunpak, Nikon, Canon, Sony, etc.) it’s very easy to create a setup with multiple lights and not be tied to the Elinchrom system. For example, I often use a three-light setup with my BxRi strobes in softboxes and a Sunpak 383 with my Kacey beauty dish. I have the two flashes programed to different channels so I can adjust their power individually, or chose to fire one or the other for different lighting effects. I should note here, if you’re mixing strobes from different companies, there’s the possibility of a color shift between the lights. How much this matters to you is hard to tell, but it’s important to mention. Naturally the BxRi also have modeling lights, which are fantastic for assisting the autofocus on you camera and showing where the light will fall. 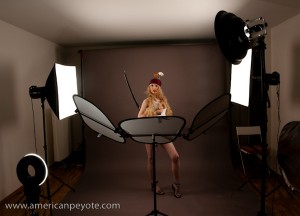 I love shooting with the BxRi strobes in the studio instead of or mixed with small flashes like the Sunpak 383 or Metz 40MZ. The BxRi flashes come in either 250ws or 500ws versions. I chose the 250ws lights because for my studio size (the ah, room in my apartment) it just didn’t make sense to get the 500ws version (although I might add a 500ws head in the future). I bought a set with two Portalite softboxes and stands. The Portalites are basic softboxes, very light and without an internal baffel. They setup up quickly and pack down to almost nothing. I often setup the BxRi strobes on the sides of the studio and then add fill in the front with reflectors and a Kacey Dish or an Orbis ringflash. With the built-in Skyports I’m able to setup the  BxRi lights and then fine-tune the lighting from the camera with the model/person in the shot. The stobe in the Kacey dish is then the only strobe I need to configure on its own. All the lights are triggered with Skyports, with one for the small flash. This process goes far faster than when shooting with all small flashes on munual which all need to be adjusted individually on the strobe body.

The BxRi design is multi-voltage , allowing one to shoot on 120V or 220V AC, basically giving a photographer the ability to shoot anywhere. This capability was actually a big reason why I bought into the BxRi lines as opposed to the Elinchrom RX lights. I travel to the United States about once a year, and it’s just sort of strange to buy an electronic device which can’t be used in other countries. I know, you can always buy a voltage converter, but I never know which one to buy, I would forget to pack it, and it just seems safer to go with a light which can run on either 120V or 220V. However, I’ll admit that this is like the Canon tilt-shift lens syndrome. You want to buy a Sony for the camera features but think, “but what if I get into architectural photography, they don’t have a tilt-shift lens like Canon or Nikon.” A lot of people get into the Nikon or Canon systems because of the large range of lenses and accessories, and then end up only using a few not-so-special zoom lenses. You could make the same argument for the multi-voltage or Skyport issue, but it’s nice to have when you need the functionality.

The BxRi series is robust, designed to wow the amateur and be used by the professional user. The body is made of plastic but seems pretty durable. Ah, here I should mention that I sort of broke mine, but it’s because I put a super heavy 150cm Walimex Octabox on my BxRi, and had to tie a piece of rope to the handle to make it support the weight of the octa. I think I sort of bent or damaged the inner support ring, as the locking mechanism doesn’t release correctly anymore, but if you stick with the normal Elinchrom modifiers and don’t overload the design, you shouldn’t have any problems.

If you’re into getting some studio lights for all the right (or wrong) reasons the BxRi line won’t disappoint. The lights are awesome, the integrated Skyports work great and the overall design gives you a lot of lighting funtionality. There are other options than Elinchrom, I had been lusting after a set of Alien Bees Einstein strobes, but even if I still lived in the US I would probably tend towards Elinchrom instead of, Alien Bees (for example). It’s only recently that Alien Bees released the Einstein units, which now allow remote power control and an attractive set of power setting features and short flash durations. Although you can get them in Europe, Alien Bees ship from the UK (an earlier distribution deal with Gotham Audio in Switzerland had fallen through),  at a price significantly highter than the US offering, and after shipping and import duties,  the final price is on the same level as Elinchrom. Then there’s Hensel and Profot lights, but they’re just too expensive for me at this time. If the BxRi are still too much you can also check out the cheaper range, the D-Lite strobes, which has been steadily adding features like a cooling fan and now integrated Skyports as well. The primary difference most users will care about between the BxRi units and the D-Lites is the flash duration, which is faster on the BxRi units (but this might not matter to you).

If you’re looking to buy some Elinchrom lights in Switzerland you have to go through Profot AG. For some reason they’re the one and only distributer in the country, but they offer a range of packages to choose from. To check out more on specs and stuff, go to the main Elinchrom website.