19 Sep ’07CamerasCameras, digital, gadgets, Photography
As a gadget freak, cameras are just cool to hold and use.? However, some days you get the feeling that the camera shouldn’t just be a tool to record events, but also an integral part of your look.? The classic photographer response is something like:“The photographer is an observer, and as such should be on the side-lines, recording events and being unobtrusive.” 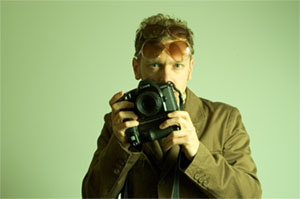 The thing is, I’ve developed a communication style care of Hunter S. Thompson literature, and sometimes the line between participant and observer should be blurred.? That’s why the writer should be part of the novel, and the photographer part of the picture.?Choosing a camera for the night can be as hard as picking the right sunglasses.? A full DSLR might look good slung over your shoulder when wearing a Lowe Alpine jacket, but a Canon 1D type camera might be too much when sporting a pinstripe suit.? Camera pimping allows one to add or remove accessories as desired. 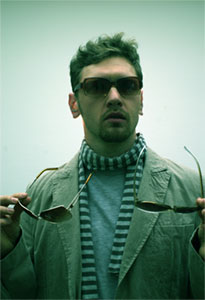 Pimping a camera out is pretty easy in the world of internet auctions and mail order.? The integration of cheap manufacturing and eBay means you can get whatever you want in the way of camera accessories.? That wouldn’t have been possible even two years ago.

One of the most functional and cosmetic extension for a DSLR is the vertical grip.? Most cameras are landscape oriented, so the photo frame or sensor is wider than it is tall.? But for portraits it’s often nice to make the picture taller than it is wide.? The easiest way to do this tilt the camera 90 degrees.? But then your hand is crooked, and in a non-optimal shooting configuration.? Most prosumer cameras have the option of a vertical grip, it screws into the camera base and generally includes more batteries so you can shoot longer.? The VC-7 for my Minolta 7D is kick-ass but cheap manufacturing technologies from China and commerce via eBay means you can get one for pretty much any DSLR. 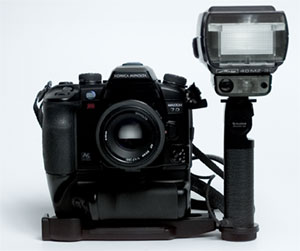 The term “Photography” refers light painting, so controlling the light is essential to making images.? Light painting is easiest to do via a camera flash placed away from the subject.? Flashes are plentiful and easy to get off the used market.? Any flash that is big, offers manual control, and can swivel will add instant “cool” to any camera.? Things like flash cards add a professional look as well as providing even flash coverage, and really will improve the look of your photos. 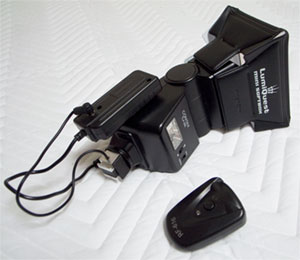 The flash bracket is a timeless camera pimp-out.? Cheap ones can be found for any camera type, even point-and-shoots.? By moving the flash away from the lens you reduce red-eye in photos produced by on-camera flash bouncing off the retinas of your subject.? It also adds bulk and a “professional” look, and those people who don’t know that equipment alone doesn’t equate to quality photos might be impressed.? In addition, it makes the camera easier to hold and adds bulk if you need to use it as a blunt instrument to make a quick escape or are attacked in a dark alley.? A number of expensive and cheap brackets are on the market.? Some of nicer mid-priced but very cool and functional brackets are made by ALZO Digital.

What’s cooler than wireless?? It’s in computers and phones – video flies through the air like ghosts of the 4th dimension.? And now you can cheaply get it for your flash as well.? One goes on the camera via flash-shoe or PC socket, the receiver goes on the flash.? This means you can do crazy lighting on the fly.? You can hold the flash above your head, put it on a stand to add awesome pop to your images.? The added gadget and wires pimps out the camera look, and thanks to Chinese manufacturing and eBay they’re a breeze to buy.? Check out Gadget Infinity.? To learn about using an off-camera flash with radio remotes, check out Strobist. 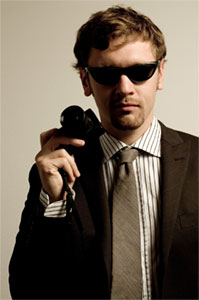 So the next time you’re heading out and want to pimp your camera to fit your look, be expressive, take a fashion risk, add the flash or accessories you need to complete your aura.