8 Feb ’08CamerasCameras, digital, DP1, PMA_08, Sigma
When an 800 pound Gorilla walks into a room, everyone notices.? When a world class lens company releases a new camera, few will barely have the inclination to even suggest turning their eyes to acknowledge noticing. ?Sony owned the PMA 2008 news like no other, and the other companies seemed to know it.? That’s what it means to be an 800 pound Gorilla, your competitors have to sit back and watch the beast do what it wants because there’s no way to realistically deny your presence. ?Aside from the Sony DSLR releases there was one lone camera release by Sigma, the lens company which also makes a DSLR which has one of the smallest user bases of any current camera maker.? It could probably be argued that the Sigma DSLR user bases is actually smaller than those of some defunct camera lines like Contax. ?Sigma produces lenses for nearly every camera type, from Canon to Pentax, and even for their own DSLR camera, the SD14 – a camera which has been discounted as much as any camera in history, except for those which were officially discontinued – because despite their best intentions to market a “competitor” few take Sigma seriously when it comes to making digitally enhanced light-tight boxes.? At least, until their development of a pocket camera with a large APS-sized imaging sensor. 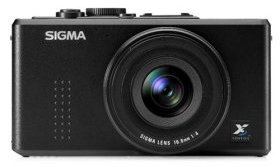