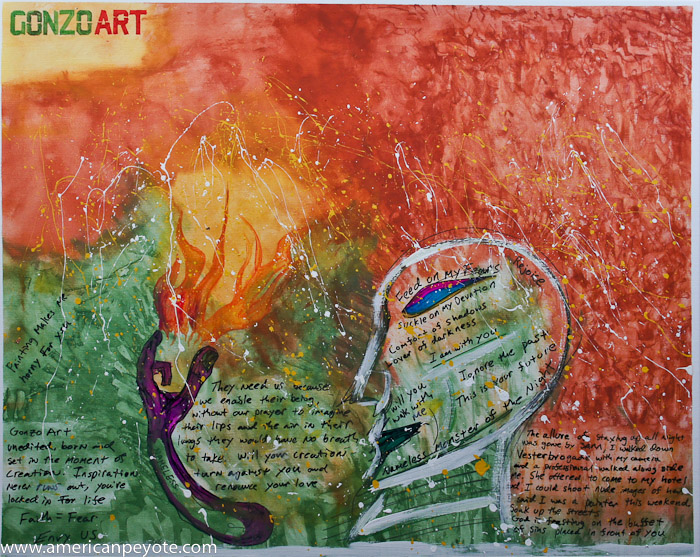 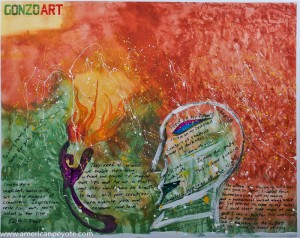 I’ve had an interesting trip the past two years. I started focusing on photography, turned to painting, and now I’m into the idea of mixing everything in video/film production. I like learning new things, it drives me in life to look back after a year after and see those interesting turning points where I learned something new about my position in life and those around me. In the past I did some experiments with Art Casting, making stop-motion videos of paintings as they’re painted to show the evolution of the work. After I participated in 1 Day of Art Copenhagen I realized there could be something more.

I wanted to create a video that brings together the thoughts in my head and the music that I feel as I paint. So after getting back from Copenhagen I picking up a Sony VG10, started watching the Vincent Laforet film class from CreativeLive, and began learning how to make short films. The first few so far are Birth – Kraft and Gonzo Art. The goal is just to make something, that is going in the right direction. I’m basically a self-learning film student at the moment, and my first goal is to get down the film production workflow and make 1-2 minute films with a message.

Birth – Kraft is a collaboration with Ethan Oelman, a photographer in Zurich. He planned a shoot with a dancer and rented out a pool in Altstetten in Zurich. I came by with my VG10 to shoot footage for a behind-the-scenes video and also to experiment. I shot footage of the dancer coming out of the water and then cut that together with still images that Ethan made during the shoot. I used Abaltat Muse to make the soundtrack. The flow of the film and the transition between themes was my main focus. Abaltat is an interesting program for quickly cutting music for videos, but I need to energize some music skills into the workflow.

Gonzo Art is a video of my favorite painting from 1 Day of Art Copenhagen, made for (t)here magazine. It includes a lot of writing inspired by Copenhagen and has many visual elements like fire and a giant head. How do you capture the texture of a painting on video? How do the visual forms need to be presented? I don’t know exactly, and that’s why this is an experiment. I used Garageband with samples from Computer Music magazine to cut the music. I then added voice-over using a helium filter on my vocals in Garageband. The soundtrack sort of sucks, but it’s a starting point for moving forward. Video production is forming the motivation to develop my music creation abilities, something I always wanted to get into.

I don’t know the future, I just know the awesome feeling I have cutting visual and music elements together. It feels right and powerful in an intimate way. It’s important to look back on how you got where you are. This short Gonzo Art video started with Talenthouse and a Creative Invite. I submitted my Lazy Art paintings and (t)here magazine picked my work, allowing me to participate in 1 Day of Art Copenhagen. This opened up a turing point in my creative life, I realized the ability to create is there, it just needs the right motivations and environment. You excel when you have awesome people around you, chilling on your own behind a computer is a recipie for mediocracy. The internet and social media are awesome for connecting people to one another and to new ideas, but you need a healthy creative environment in you life.