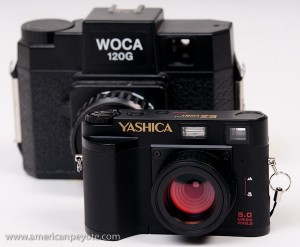 Yashica released a cool little camera called the EZ F521. It’s been released in Japan and I ordered one from Japan Exposures, this is a review of the camera and additionally of the Digital Holga concept. The Yashica F521 has been labeled the Digital Holga. I think this makes sense on some levels and is preposterous nonsense in other ways. The Holga camera is a simple 120 medium format camera produced in China. You can set the negative size to 6×4.5 or 6×7. The body is plastic as is the lens (the Woca version I use has a glass lens) and comes in variations with or without a flash and now different colors. There’s no way to focus with any precision, the lens has three positions, two apertures, and a fixed shutter speed. Of course you can modify the Holga to do bulb exposure and extra shutter clicks can build up an exposure so you can get cool abstract layers overlaid in one image. Basically the Holga is a cheap and fun way to get into medium format photography. The bodies originally cost about 20 dollars, although since they’ve achieved cult status and been produced in various colors, you might pay between 50-100 USD for a new body (maybe with a flash) which is a lot for some pressed plastic.

The Holga concept is to just focus on taking pictures with a cheap camera where you need to focus on the subect, as the performance of the camera sucks. The term Digitla Holga has been thrown around a lot since the rise of digital camera technology, but in my mind the only thing that comes close is sticking a medium format back on a Holga or Woca body. I know you can put a Holga lens on a DSLR, and no, I see no fucking point in putting a 2 cent lens on my Sony A900 body. And no, I don’t want a Lens Baby either. Why? Because the Holga look is a combination of substandard manufacturing and horrible body design coupled with cheap plastic.  It’s insane to put actual time or money into trying to replicate the look in any other way. 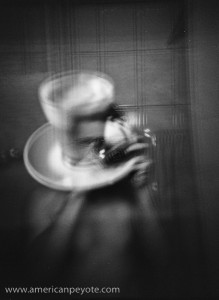 The look of images from the Holga/Woca is characterized as unique, as it comes from light leaks and nearly impossible to determine exposure and focus issues. The image to the left was taken in a coffee shop in Zurich with my Woca. You can see scratch marks from the Woca body and it has a very dark and grungy feel to it. Why try to replicate this look in any other way? Sticking a shitty plastic medium formant lens on your Nikon D3 is not being creative. Additionally, trying to replicate the Holga look in Photoshop using PS actions and filters with programmed algorithms using repeated patterns accomplishes nothing short of making your images look like over processed crap. So in this sense, the Yashica F521 is nothing like a Holga. It doesn’t have light leaks and I think it’s safe to say that pictures from one will look closely like those of another, with little variation from camera to camera. However, the substandard lens and funky exposure properties are retained in the F521 design.

The F521 is too well-built to be a Holga. I’m pretty confident my Holga/Woca would explode if dropped on the ground. Holgas are made from cheap plastic with poor fracture toughness, alowing brittle cracks to propagate easily through the body. The F521 actually has build quality on par with my Ricoh GRD and Canon G10. It’s built like a little tank and sort of resembles a miniature Fuji GA645. The finish on the body looks and feels like anodized aluminum and the faux leather on the grip looks well affixed to the body.

Anyways, what does it mean to be a Holga? The philosophy behind Holga is that you just shoot, without trying to perfect exposure or focus. Resolution is shit because the lens is crap. The point is just to have fun, and if a cool picture is the results, then sweet. Some will say that these limitations make you more creative, like choosing to use a 50mm instead of a 24-70 zoom. I think this is bullshit, limiting your ability to create an image doesn’t improve creativity, it simply limits your options. Want to be creative? Take up painting and challenge yourself to create something in a completely different way from your normal routine. Photography is the easiest “art form” ever developed, the creative part comes from realizing the non-intuitive attributes of a subject. With a crappy camera like the F521 or Holga you just focus on the subject, not on focus or exposure because you have very little control over either one. So you could say these cameras make you more visually aware, but it’s not a short-cut to overdosing on creative expression. 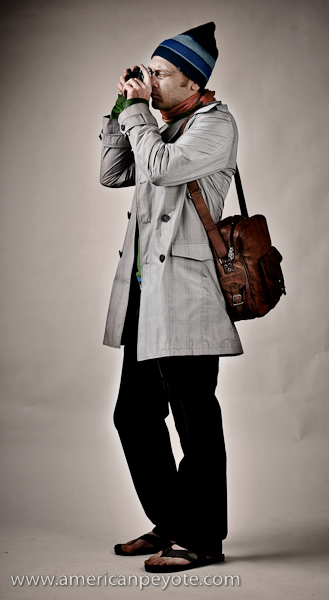 Shooting with the F521

Here are the basic details, the Yashica F521 is light, sized to the palm of your hand, runs on three AAA batteries and takes SD cards. A 1 Gig SD card gives you like 180 images if you use the 12 megapixels interpolated image setting. The normal image size is 5 megapixels. I figure it can’t hurt, so I use the 12 megapixel setting. Look, it’s a toy camera, but the F521 actually has decent control over parameters. You can set the exposure compensation, white balance, image size, there’s macro capability (the lens has two focus positions), on-board flash, and some color modes. The automatic white balance is really horrible, so I set that myself.

My first outing with the F521 was a short trip from Zurich to Basel.  I took the camera along and shot a bunch of abstract motion images in the Zurich and Basel train stations. This is the type of imagery I like producing with this type of camera. I’ve done the same in Tokyo with my Ricoh GRD (GRD Frozen Motion Photography). Basically I walk around shooting while I’m walking and the long shutter speeds due to the low light of the Bahnhof produces the blurred abstract images I see in my head as I’m moving through the night. The F521 scans the sensor from top to bottom (I believe) when taking pictures, so if you’re moving the camera you can get a wavy line patterns due to the sensor scan rate.

Due to it’s small size the F521 is a very non-threatening camera and can be useful for creative street photography. It fits in any bag and the lens has a rubber cap, so it’s very compact to take around and you can throw in a coat pocket without worrying that you might be damaging the front element. 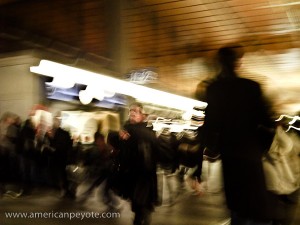 Picture quality is as you would expect from a digital Holga, absolutely horrible, but that’s part of the charm and experience. I mainly use these types of cameras to produce abstract images, more akin to my Artcast paintings than a traditional photo image. You end up with pictures with unpredictable exposure, focus issues, and eventually with non-intuitive results, which is exactly in line with the Holga spirit. Concerning digital workflow, I download the images from the SD card directly into Adobe Lightroom for organizing and processing. The F521 image hold up well to processing, including exposure compensation, shadow adjustments, clarity, etc. Shooting with the F521 is a nice balance to shooting with the A900, and I’m planning to shoot with the 521 and my Elnichrom BxRi lights as soon as I get a photodiode to trigger the Skyports from the on-board flash. Maybe I’ll take off the lens and figure out a way to mount a Mamiya 150 f/3.5 portrait lens to it.

Is It Worth It?

The EZ F521 is cheap and definitely worth a look. It’s available for the international market via Japan Exposures and costs 9,990 Yen (about 100 USD). A few years ago Japan Exposures was selling the Fuji Natura S camera with the fixed 24mm f1.9 lens, I hesitated and then they stopped producing them. It’s my biggest purchasing regret of my camera buying life. So I bought the F521 without really thinking about it and so far I’m loving it. Does it live up to the name Digital Holga? Yes, I’m of the opinion that it totally does. 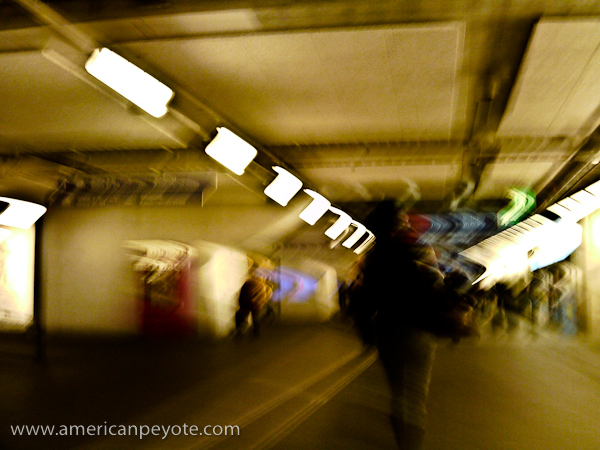 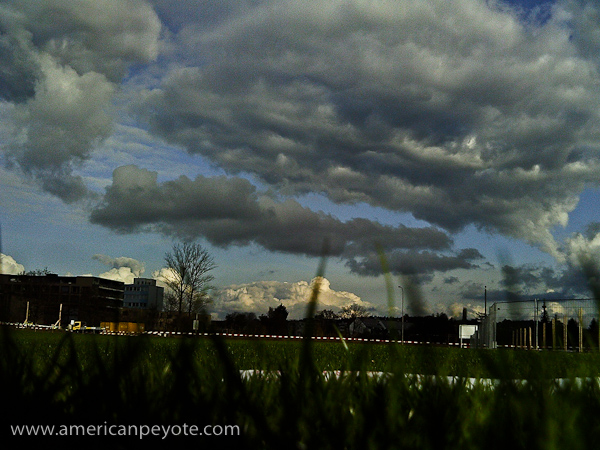 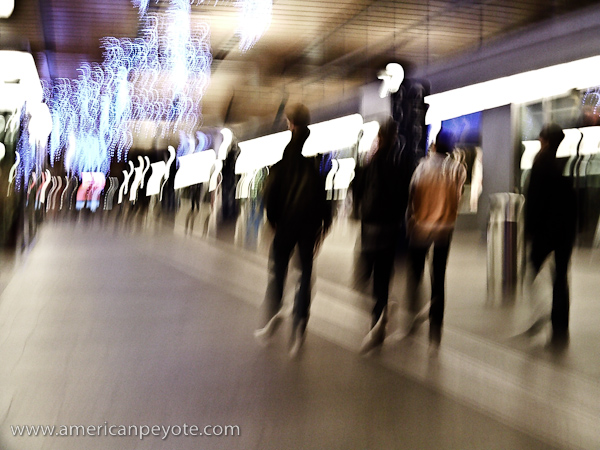