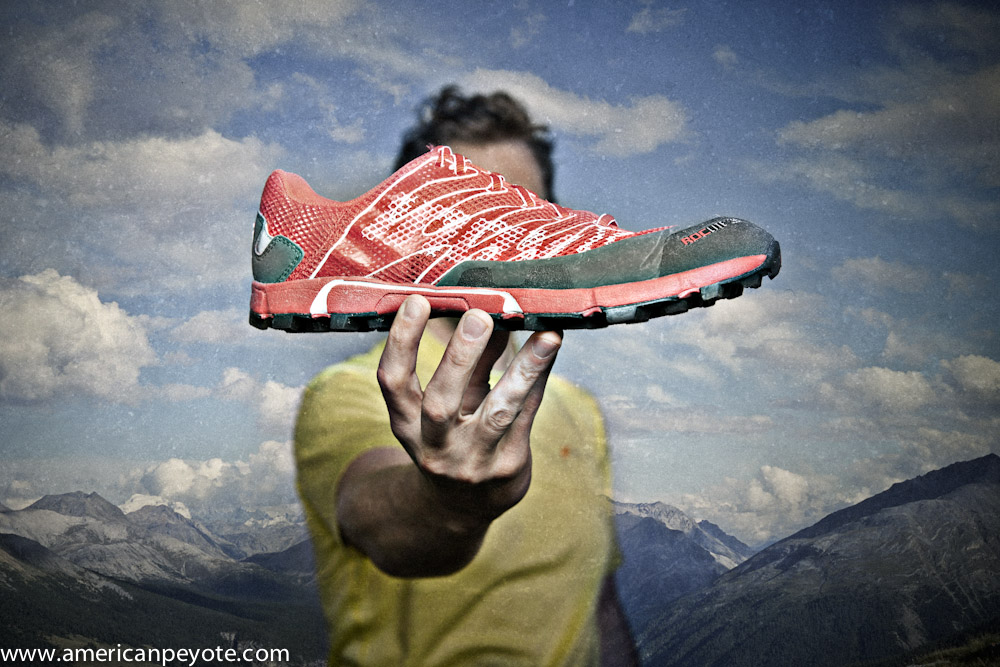 I was out running with Christian Langenegger the other day and he mentioned he as going to have a talk with the good folks from Inov-8. A week later I dropped by his place and he had two pairs of shoes to show me, the pair I took home to test was the RocLite 285 trail running shoe. I’ve since been running on them and pondering the design, and the following is the result of my meditations on them but I’ll just jump the gun and tell you straight up: the RocLite 285 is a wonderful minimalist trail running shoe. 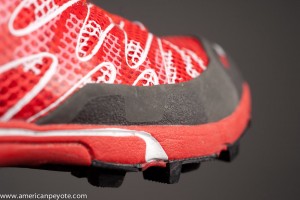 The 285 is just the second minimalist shoe I’ve tried. I own the La Sportiva Vertical K, which I bought mainly for the interesting sole (better for ascending rocky summits), flexible foot and overall light-weight design. When I first held them in my hands, what attracted me to the 285 was the aggressive sole that reminded me of the Salomon Fellcross, and it looks ideal for negotiating soft wooded trails and technical rock hopping down mountain trails.

I like running on shoes like the Salomon Crossmax, but there’s always a certain separation from the environment which you’re running on a traditional running shoe. It’s great to float along a trail on a comfort shoe like the On Cloudsurfer, but it’s not the same experience as with a minimalist design like the 285 or Vertical K. On asphalt the 285 sort of sucks (as would be expected). You can clearly feel the stress points of the treads through the sole in some points, and it’s best to limit your exposure on hard flat stuff (concrete). On packed trails they feel fine and my gait is fluid and natural. On soft ground and trail they are awesome.

My main experience with the 285s was on a combined bike-run workout near Zurich. This included 27km cycling from Winterthur to Bauma, then I ran up the Hornli (~580m elevation gain) to the highest point in Kanton Zurich, then ran back down to Bauma and biked back to Winterthur. The trail up the Hornli is a combination of packed and soft trails with minimal asphalt exposure. Coming down from the Hornli summit there was light rain and the trail was soft with some mud and various exposed tree roots and rocks. I let myself go and glided down in a sort of euphoric flow (as the psychiatrists say). This included area where I’m basically running down mountain bike trails and needed precise foot placement to negotiate tree roots and good stability to avoid sliding off the side of the trail and falling through the woods. 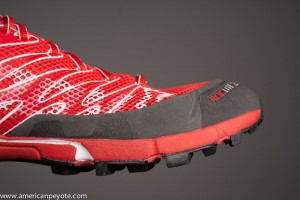 The treads of the sole are aggressive and robust, looking something like soccer cleats. I felt total confidence landing on the soft ground descending down the steep trails, occasionally pivoting off of tree roots and avoiding the rocks by a few centimeters. This is a different experience than landing with a cushioned shoe like the Crossmax or Cloudsurfer. When you feel the trail you are more in tune with the world and the whole running experience feels more natural. You are also more efficient in speeding up or slowing down as trail inclination changes, and can really attack the trails (if you run that way). Otherwise wearing traditional running shoes you have to go slow with little timid baby steps when descending steep terrain, worried that you might slip and fall. There’s none of that foolishness with the 285. 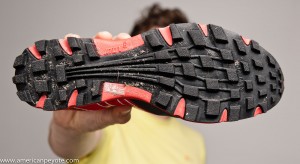 The principle of the 285 sole (like all shoes from Inov-8) is the inclusion of stiffening ribs along the direction of your foot bones called Meta-Flex. The stiffeners end around the line along the ball joint where the shoe is extremely flexible. The result is a flexible sole with stiffness along the direction of your feet. I love compliant mechanical designs like this. The goal is to optimize the function of the shoe with your natural biomechanics. In my mind Meta-Flex is reminiscent of the carbon rib flexible wing designs for Micro Air Vehicles (MAV) that came out of the University of Florida (AIAA 2002-0705). In their paper Flexible-Wing-Based Micro Air Vehicles the authors showed that the combination of a carbon fiber rib arrangement integrated into a flexible wing resulted in a wing shape that accommodated to changes in air pressure and maintained a good ratio between lift and attack angle of the wing. The flexible-wing MAVs are much more efficient than the previous standard of using stiff wings (the traditional way to manufacture airplanes). Of course, birds have been evolving this design concept for thousands of years so it shouldn’t have been a surprise. Anyways, I love that Inov-8 put a similar concept into their shoes. It is…innovative. 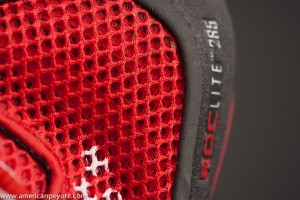 The uppers of the RocLite 285 are composed of that same nice 3D hexagonal weaved mesh used in the On Cloudsurfers and the Salomon S-Lab running packs (although in a larger cell version with the pack). I love this fabric weave as it offers an efficient structural shape with three planes of symmetry and also breathes very well. It’s the best material I’ve seen so far for a warm weather running shoe.

The toe protector is a flexible rubber and isn’t very stiff to resist impacts from random rocks. Is this a design deficiency? I don’t think so, and here’s why: the damage to your toe doesn’t come directly from the hardness of the toe guard, but from the impact force on the toe region transmitted to your body, and this is a function of your foot sliding forward in the shoe (when isn’t sized properly) and being in contact with the inside surface of the shoe during impact. The 285s have a nice snug fit, and the toe is pointed, extending forward like the profile of a bird beak. From a design standpoint, this narrowing means your foot is restricted from sliding forward into the toe guard region when your toe impacts directly with a random rock. This should offer a buffer region and reduce toe damage.

In many ways I see this as a better solution than traditional design (like on the Salomon Crossmax) where a wide toe box is used for comfort to allow the foot to spread out, but doesn’t offer any resistance to your foot sliding forward when you impact with a rock at the toe guard. I’ve read about people finding the toe guard too weak and flexible, but from a mechanics standpoint that doesn’t matter. It doesn’t matter how stiff the toe guard is because if your toe is against it when it hits a rock the force will be transmitted and potentially cause damage. So, +1 to Inov-8 for an innovative toe box design that should reduce toe impact forces (although I haven’t done an exhaustive study on this). The narrow foot box shape holds other advantages as well. 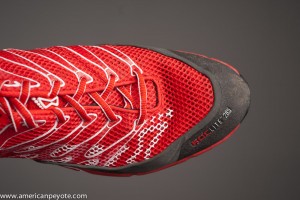 I started running mountains on the Salomon Crossmax XR, a shoe with nice treads and a wide footprint. I thought this was ideal as a way to distribute impact force when I land on trails, but after running on the 285s I have a new view on the subject. The 285s have a streamlined design, the foot box narrows towards the toes, more like a soccer shoe. The Crossmax are wider in the foot front, more like the bow of a ship or a snowshoe. This may not mean much on flat trails, but when you are letting your toes dance between rocks and tree stumps, it makes a critical difference. I don’t have to worry about part of my feet catching on the side of a rock when I meant for it to land next to the rock. I know intuitively how my foot should land on the Earth, but my body doesn’t automatically account for the shape of the shoes, and with the 285s it doesn’t need to. The added area of a shoe like the Crossmax make this more of an issue on technical trails. With the 285s trail running is more like climbing, where I need to point my feet to a specific spot on the Earth. If my foot placement is a little off on the rock face then I fall off. This added shoe mass on the Crossmax makes it harder to negotiate rock ridges. I occasionally like to take climbing breaks on boulders or run off trails and up rock ridges, and a shoe like the Crossmax is dangerous on such terrain, the RocLite 285 is more secure in such situations.

Will I Race On Them?

My upcoming races this year are mainly ultras, and I’m not sure a shoe like the 285 would be ideal for long distances in the mountains (by long I mean over 50 km with possible snow sections). For the Swiss Irontrail T71 I’m probably going to wear a pair of Salomon S-Lab 4 Wings soft ground shoes. Part of the reason for this is also that the 285 uppers are made with an open 3D mesh, and for the Irontrail I need a shoe that is closed and at least water repellant. However, it could be a contender for running the SwissAlpine K42 this year (but I’m leaning towards the K78). Inov-8 probably has the broadest range of trail running foot ware of any other company. So much so that I don’t really know the difference between many of the models. For mountain ultras for example, I know that the Inov-8 X-talon has more cushion under the heel, and I’m looking forward to trying them out in the future. 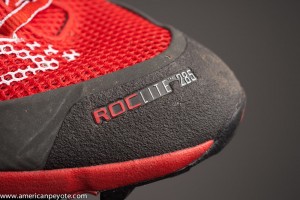 The 285 is a fabulous design. It’s minimalist, it’s designed for function, the treads are excellent on the trail and it has a great fit. I see the RocLite 285 as being perfect for shorter (0-30km) technical runs in Switzerland like ascending the peaks around Braunwald, running from village to village in the Glarus area (like Elm-Linthal), or up a peak like Pizol (after the snows have cleared). For these types of adventures I need a shoe that fits like a climbing shoe and digs into the mountain trails with the option to dance along ridges, and for this the Inov-8 285 delivers.